Sea Waves Sparkles in Blue at Night: Scientists Explain How Dinoflagellates When 'Squeezed Tight' Cause Bioluminescent Light Waves on the Seashore 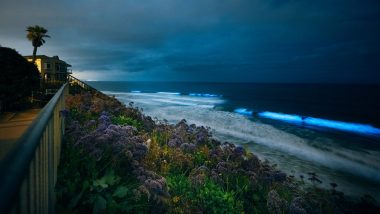 Blue waves make quite a splash along the seashores. Every year, many videos and photos come in on social media that show sparkling lights in the waters giving visitors an exquisite view. This is a common phenomenon. And the glow or sparkle coming from bioluminescent marine organisms has fascinated observers on ships or the seashore. But what actually triggers the light? The process is something was not clear to many until recently, when an international team led by the University of Cambridge has developed unique experimental tools based on micromanipulation and high-speed imaging. So, it is the heyday of microscopic organisms called dinoflagellates when ‘squeezed tight,’ actually transforms coasts around the world, endowing waves with blue light.

During the pandemic, when the world is majorly confined indoors, videos of California beaches glowing in blue began to appear on the internet. The ocean waters were alive with light, and the mesmerising moment was captured by surfers and other visitors, the photos and videos of which were widely shared on social media.

Bioluminescence means production and emission of light by a living organism. It widely occurs in the marine creators, making a lot of seas change their colour to sparkling shade in the night time. But the process of the glow coming from bioluminescent marine organisms has been explained by scientists. The mechanical stress that triggers this light emission in single-celled organisms is called dinoflagellates. They are the most common source of bioluminescence in coastal waters.

Raymond E Goldstein and colleagues revealed in the study how a single-celled organism of the species Pyrocystis lunula, known as dinoflagellates produces a flash of light when its cell wall is deformed by mechanical forces, most likely associated with ion channels. They are proteins distributed on the cell membrane. When the membrane is loaded, the channels open, allowing calcium to move between cells in the cell, which causes a biochemical cascade that produces light.

(The above story first appeared on LatestLY on Jul 07, 2020 03:24 PM IST. For more news and updates on politics, world, sports, entertainment and lifestyle, log on to our website latestly.com).