Virgin Galactic's VSS Unity Spaceplane Takes Off Today; Here is All You Need To Know About Richard Branson's Spaceflight

Richard Branson is set to achieve another milestone, a space one, as he gets ready to fly to space aboard VSS Unity spaceplane, Virgin Galactic first fully crewed space flight test. The 'Unity 22' mission is due to launch today, on July 11. It is scheduled to take off from the Spaceport America complex in US's New Mexico. 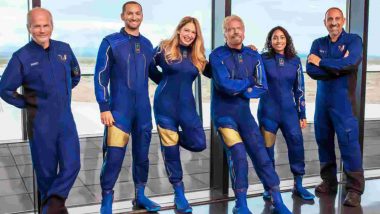 New Delhi, July 11: Richard Branson is set to achieve another milestone, a space one, as he gets ready to fly to space aboard VSS Unity spaceplane, Virgin Galactic first fully crewed space flight test. The 'Unity 22' mission is due to launch today, on July 11. It is scheduled to take off from the Spaceport America complex in US's New Mexico. The spaceflight will have sic crew members onboard, including Branson. Apart from its billionaire founder, three employees of Virgin Galactic and two pilots will fly into the space on VSS Unity flight. An Indian-origin aeronautical engineer is also a part of the six-member crew.

A carrier aircraft, VMS Eve, will first take off from the runway and will drop VSS Unity after reaching a height of roughly 50,000 feet, according to report. Following which the pilots will take over. It is being dubbed as a 'space plane' and is the size of an executive passenger jet. Scroll down to know more about the highly ambitious spaceflight by Virgin Galactic that is being considered as a huge step towards space tourism. Sirisha Bandla to Fly Into Space Aboard Virgin Galactic Flight, Set to Become Second India-Born Woman to Achieve Feat After Kalpana Chawla.

Time and Date of the Unity 22 Mission:

The VSS Unity spaceplane by Virgin Galactic is schedule to launch on Sunday, July 11 i.e, today. In a tweet the company said that the live broadcast of the space flight will begin at 6 am PT, 2 pm BST, and 9 am ET. In India the same will be available at around 6:30 pm IST. Richard Branson Space Flight Live Streaming, India Date and Time: Know When, Where and How to Watch Live Broadcast of Virgin Galactic's VSS Unity Spaceplane Launch.

Place of Its Launch:

The VSS Unity spaceplane will be launched from the Spaceport America complex in New Mexico in the US. An aircraft by Virgin Galactic will first take off from the runway and will drop the spaceplane. after reaching a height of roughly 50,000 feet

A total of six people will fly into space aboard the VSS Unity spaceplane today. Virgin Galactic founder and British billionaire Richard Branson will be on the flight along with three other employees of the spaceflight company. They will take up the role of researcher experience. Indian-origin Sirisha Bandla, who is the vice president of government affairs and research operations in the company, is one of them. Virgin Galactic's chief astronaut instructor Beth Moses and lead operations engineer Colin Bennett are the other two. The pilots for this mission are Dave Mackay and Michael Masucci.

Duration of The Mission:

According to reports, the VSS unity space ship is expected to take some 90 minutes. While the whole space experience will take around four-five minutes, after which the spaceplane will start its re-entry into the Earth's atmosphere.

Several celebrities are expected to witness the the launch of Virigin Galactic's VSS Unity spaceplane. The spaceflight has been able to garner much attraction, attention and applaud across the world. Branson's spy adventure comes well in time to overshadow and reduce the buzz around Amazon founder Jeff Bezos space travel. Bezos will also be flying into the space in his company's Blue Origin some nine days after Unity 22 mission.

(The above story first appeared on LatestLY on Jul 11, 2021 01:22 PM IST. For more news and updates on politics, world, sports, entertainment and lifestyle, log on to our website latestly.com).