Snapchat to Shut Down Snapcash on August 30

Snapchat will be terminating its digital peer-to-peer payment service "Snapcash" on August 30. 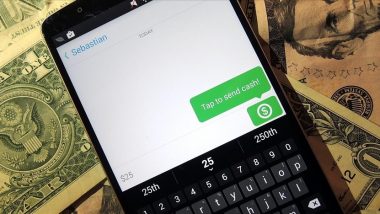 "Yes, we're discontinuing the 'Snapcash' feature as of August 30, 2018. 'Snapcash' was our first product created in partnership with another company - 'Square'. We're thankful for all the Snapchatters who used Snapcash for the last four years and for Square's partnership," TechCrunch quoted a Snapchat spokesperson as saying late on Sunday.

"Snapcash" used the regular number, expiration date and card verification value (CVV) of a debit card, allowing Snapchatters to shop, send and receive money without having to leave the app. Snapchat Not Working for Many Android Users From Past Couple of Days: Report.

The feature, however, did not allow cancellation of payments once the process was completed.

The digital-payment feature was made part of Snapchat back in 2014 in partnership with "Square" that handled the actual payment processing.

Even though the purpose of the feature was purely for user-convenience, it was exploited by users who offered adult content in exchange for payments through "Snapcash". The misuse could have caused Snapchat serious legal and PR problems.

(The above story first appeared on LatestLY on Jul 23, 2018 12:35 PM IST. For more news and updates on politics, world, sports, entertainment and lifestyle, log on to our website latestly.com).