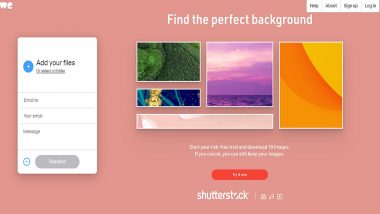 New Delhi, May 30: The Union government on Saturday banned the popular file-sharing site WeTransfer.com citing national interest and public interest for making this move. Earlier, Department of Telecommunications (DoT) sent a a notice to internet service providers across the country to ban three URLs, including entire WeTransfer website.

According to report, published in the Mumbai Mirror, the Department of Telecommunications (DoT) had issued notice to all the internet providers, asking them to ban two specific URLs on the website, while making it mandatory to ban entire WeTransfer website. Though the exact reasons for issuing a ban on WeTransfer website is yet to be disclosed, most of the leading ISPs have blocked the access of WeTransfer for their users. Biggest Spy Network Using Illegal VoIP Exchange in India Busted by Military Intelligence of J&K and Mumbai Police.

It is to be known that WeTransfer is a popular file sharing website, which allows its millions of users to send files to up to 2GB straight to the recipient’s email without the need to create a separate account for it. If a user is willing to pay for the services, then he or she can transfer files of higher capacities, however, most of the users use the free plan. With the ease in using the website, it has become very popular in the country.

(The above story first appeared on LatestLY on May 30, 2020 06:24 PM IST. For more news and updates on politics, world, sports, entertainment and lifestyle, log on to our website latestly.com).