Eleven more American service members newly assigned to South Korea have tested positive for the novel coronavirus, the US military said on Monday, amid rising concerns about increases in imported cases. 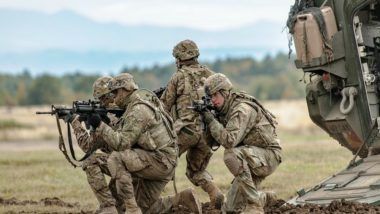 Seoul, July 13: Eleven more American service members newly assigned to South Korea have tested positive for the novel coronavirus, the US military said on Monday, amid rising concerns about increases in imported cases.

On Monday, South Korea reported 62 new infections and 43 of them came from overseas, the highest imported cases in 110 days.

The latest USFK cases brought the total number of infections among the forces-affiliated individuals to 74.

Of the 11 new cases, two arrived at Osan Air Base in Pyeongtaek, 70 km south of Seoul, on a US government chartered flight from their home country on July 7.

The remainder arrived at Incheon International Airport on four separate commercial flights since July 8, according to USFK.

They all tested positive on their first mandatory test prior to entering quarantine, and have since been transferred to an isolation facility designated for confirmed virus cases on either Camp Humphreys in Pyeongtaek or Osan Air Base, it added.

All USFK-affiliated individuals arriving in South Korea are required to undergo the virus test and are quarantined for 14 days.

Medical personnel administer a second test prior to their release, said the Yonhap News Agency report.

Despite the recent surge in the caseload, USFK stressed that it remains "at a high level of readiness with less than 1 per cent of its active duty service members who are currently confirmed positive for COVID-19".

With the new development, the number of COVID-19 cases in South Korea has increased to 13,479, with 289 deaths.

(The above story first appeared on LatestLY on Jul 13, 2020 03:22 PM IST. For more news and updates on politics, world, sports, entertainment and lifestyle, log on to our website latestly.com).