Afghanistan's central bank, Da Afghanistan Bank (DAB), has allowed merchants and owners of private companies to withdraw $25,000 from their bank accounts once in a month, a local TV channel reported. 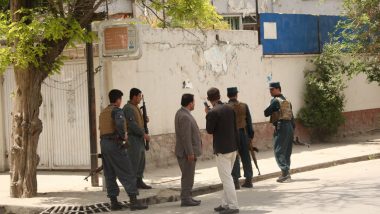 Kabul, September 21: Afghanistan's central bank, Da Afghanistan Bank (DAB), has allowed merchants and owners of private companies to withdraw $25,000 from their bank accounts once in a month, a local TV channel reported.

Following the latest decision and announcement of DAB, the Afghan entrepreneurs could receive $25,000 or its afghani equivalent once in a month from their accounts from all banks across Afghanistan, Xinhua news agency quoted TOLO News as saying on Monday. Afghanistan Crisis: Afghan Central Bank Urges People To Use Local Currency in Transactions.

Reports of freezing Afghanistan's bank assets by the US as well as a halt of funds by the World Bank and the International Monetary Fund (IMF) have recently fuelled concerns among Afghans.

On August 28, the DBA issued an order to all banks in the country, setting a temporary limit of withdrawals of $200 or 20,000 afghani for one customer every week. Thousands of customers had waited in long lines to withdraw their savings since the Taliban's takeover of the country in August.

Meantime, local businessmen and members of the Afghan Chamber of Commerce told TOLO News that the cash allowed to be withdrawn was insufficient and they could do less with the amount. They said in order to run their business they need enough money to withdraw from government-run and private banks.

(The above story first appeared on LatestLY on Sep 21, 2021 08:50 AM IST. For more news and updates on politics, world, sports, entertainment and lifestyle, log on to our website latestly.com).