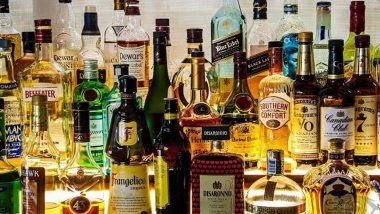 Johannesburg, August 6:  Botswana, the southern Africa country, has banned the sale of alcohol and has suspended all liquor licences until further notice. According to reports, the authorities in Botswana informed that the reason for the ban was that alcohol had 'negative impact' on adherence to coronavirus protocols. A gazette notice stated that the reason given for the suspension and ban of alcohol in the country was that it had "negative effects on adherence to COVID-19 protocols"

A gazette notice said: "The ban is based on evidence that consumption of alcohol increases the risk posed by COVID-19 due to its -ve effects on adherence to COVID-19 protocols". China: 90% of Recovered COVID-19 Patients in Wuhan Suffering from Lung Damage, Says Report.

Gov. of Botswana has banned the sale of alcohol & suspended all liquor licences, until further notice.

A gazette notice said the ban is “based on evidence that consumption of alcohol increases the risk posed by COVID19 due to its -ve effects on adherence to Covid19 protocols". pic.twitter.com/zapE7nMeXP

Botswana has seen a surge in coronavirus cases, especially in cities. The southern Africa country, which has about 2 million inhabitants, has recorded 804 coronavirus cases, 2 deaths and 63 recoveries so far.  On July 31, Botswana's capital city, Gaborone, was placed under total lockdown for a period of 14 days amid the rising cases. Reports informed that authorities in Gaborone closed schools and restricting movements after local COVID-19 transmissions doubled.

South Africa has witnessed a dip in new coronavirus cases, its health minister said on Wednesday, adding that vigilance must continue "to prevent a renewed surge." According to reports, overall South Africa reported an average of more than 10,000 new cases per day at the end of July, and now new confirmed cases have dropped to below 5,000 per day. The World Health Organization is sending a team of experts to South Africa to help it contain the pandemic.

(The above story first appeared on LatestLY on Aug 06, 2020 12:45 PM IST. For more news and updates on politics, world, sports, entertainment and lifestyle, log on to our website latestly.com).