China 'Not to Flood Economy With Liquidity' in COVID-19 Recovery, Scraps GDP Growth Target For 2020-21 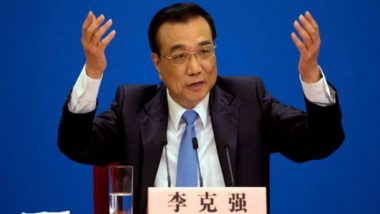 Beijing, May 28: China announced a lower-than-expected fiscal stimulus package to rejuvenate the economy affected by COVID-19 pandemic. Contrary to high-value economic packages announced by several developed and emerging countries, Beijing decided to unveil a modest package, arguing that flushing excessive liquidity into the economy would lead to negative traits. India Unveils $266 Billion Economic Stimulus in Bid to Bring Economy Back on Track.

Chinese Premier Li Keqiang, in his press address following the culmination of National People's Congress (NPC) session on Thursday, said the government has decided to inject only that amount of liquidity which would suffice. Other financial measures would be forceful and targeted - mostly aimed at addressing the unemployment in urban region, he added.

Using a Chinese proverb, Keqiang claimed that excessive liquidity would end up aiding those who want to maximise profit through future and securities trading. The arbitrage activities will pick pace at a time when the money should be directed at normalising the functioning of economy, he added.

"Just as water is important to fish farming, sufficient liquidity is important to economic development. But excessive liquidity will induce froth in the marketplace where some people may attempt to muddy the waters and fish for arbitrage," he was reported as saying by the state media.

'Beijing Not to Flood Economy With Liquidity'

China has so far announced 3.75 trillion yuan that will be issued via special local governments bonds to fund infrastructure projects. Another 1 trillion yuan would be raised through special treasury bonds, the government said.

According to Keqiang, a total of 500 million yuan would be foregone in form of tax cuts to allow small and medium business to cope up with COVID-19 impact. The target for job creation in urban areas has been fixed as 9 million for the year 2020-21.

This is also the first time when China has scrapped a GDP growth target for the fiscal. The move is spark by the jolt to economy by COVID-19 pandemic, whose effect is yet to be measured. Since the health crisis is an ongoing onslaught, the government cannot predict the extent to which it would damage growth in the current year, the Premier said.

(The above story first appeared on LatestLY on May 28, 2020 03:24 PM IST. For more news and updates on politics, world, sports, entertainment and lifestyle, log on to our website latestly.com).