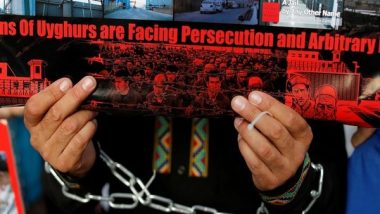 Hong Kong, March 1: Amid growing criticism over human right abuses by the Beijing, population statistics published by the Chinese government shows a significant drop in birth rates in Xinjiang province. The figures, which run up until 2019, cited by Hong Kong Free Press (HKFP), show a decrease in birth rate by around two-thirds within two years.

The sudden decline in birth rate comes in the backdrop of increasing pressure on Beijing over reports of mass internment and coerced population control of the Uyghur population in Xinjiang. Rhoda Kwan, writing for the HKFP said between 2017 and 2019, the birth rate in Xinjiang almost halved, dropping from 15.88 per cent in 2017 to 8.14 in 2019.

According to an annual report compiled by the National Bureau of Statistics of China, "China's national average rate only decreased by around 2 per cent in the same period. China to Step Up Global Influence Campaign Amid Rising Discontent: Report.

"The same figures detailed in the China Statistical Yearbook show population growth rate in the Xinjiang shrank by two-thirds from 2017 to 2019, dropping from 11.40 per cent to 6.13 in the first year, and to 3.69 per cent in the second," Kwan said.

Last month, the Chinese embassy in the US had shared a report by Chinese state media outlet China Daily and wrote: "Study shows that in the process of eradicating extremism, the minds of Uyghur women in Xinjiang were emancipated and gender equality and reproductive health were promoted, making them no longer baby-making machines. They are more confident and independent."

The Chinese Embassy's post was later removed by Twitter after it drew ire and calls for removal given the Chinese government's oppressive campaign against Uyghurs and other Muslim ethnic minorities.

The Chinese government has increased its "groundless prosecutions" with long prison sentences for Uyghurs and other minority communities in recent years in China's Xinjiang province, according to Human Rights Watch (HRW). High Malnutrition Rate in Xinjiang Amid China Crackdown on Uyghurs.

HRW, a non-governmental body that conducts research and advocacy on human rights last week had said since the Chinese government escalated its repressive "Strike Hard Campaign against Violent Terrorism" in late 2016, the region's formal criminal justice system has convicted and sentenced more than 250,000 people.

"While few verdicts and other official documents are publicly available due to Xinjiang authorities' tight control of information, a Human Rights Watch analysis of nearly 60 of these cases suggests that many people have been convicted and imprisoned without committing a genuine offence," HRW said.