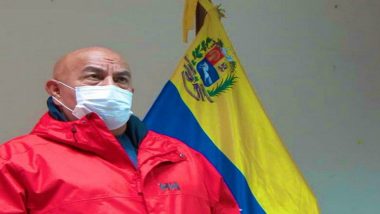 Caracas, Aug 14: Dario Vivas, the Mayor of Venezuela's capital Caracas, has died after suffering from Covid-19 for more than three weeks. The senior member of the ruling socialist party died on Thursday.

The 70-year-old announced on July 18 that he had tested positive for the virus and was undergoing treatment in isolation, reports Xinhua news agency.

"I report that I have tested positive for ... COVID-19," Vivas said on Twitter at the time. COVID-19 Vaccine Update: WHO in Conversation with Russia for More Vaccine Information, Says Expert.

Known to be a strong ally of President Nicolas Maduro, Vivas was appointed head of the Capital District in January.

Vivas is the first top-level government official to die of Covid-19, although several others have tested positive, including Diosdado Cabello, the president of the National Constituent Assembly (ANC); Oil Minister Tareck El Aissami; and several governors and mayors of the South American nation.

(The above story first appeared on LatestLY on Aug 14, 2020 10:01 AM IST. For more news and updates on politics, world, sports, entertainment and lifestyle, log on to our website latestly.com).