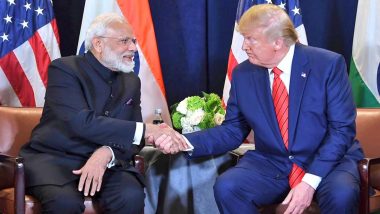 Washington, July 4: United States President Donald Trump on Saturday replied to Indian Prime Minister Narendra Modi's Fourth of July greeting on Twitter. Trump, while referring to Modi as "my friend", thanked for him for extending the wishes on US Independence Day 2020. Fourth of July 2020 Wishes: 'As Largest Democracies We Cherish Freedom', PM Modi Tweets to Donald Trump.

Trump, apart from highlighting the apparent bonhomie he shares with Modi, also shed light on the deep Indo-US ties. "America loves India," he added in his tweet.

The exchange of tweets between the two world leaders came a couple of months after Trump went all praise for Modi after he approved the supply of hydroxychloroquine to the US, and the latter had reciprocated the warm gesture on social media.

"I congratulate @POTUS @realDonaldTrump and the people of the USA on the 244th Independence Day of the USA. As the world's largest democracies, we cherish freedom and human enterprise that this day celebrates," Modi had stated in his greeting on Twitter earlier today.

Fourth of July is the major national celebration in the United States, as the country commemorates its struggle against the British colonial regime to seek independence. The day, this year, marked 244 years since the legal separation from American colonies from the imperial British empire.

(The above story first appeared on LatestLY on Jul 04, 2020 11:36 PM IST. For more news and updates on politics, world, sports, entertainment and lifestyle, log on to our website latestly.com).