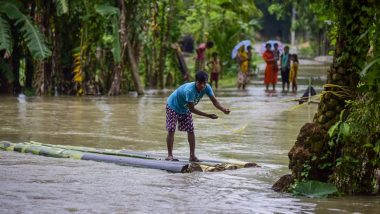 Brussels, August 11: The European Union (EU) on Tuesday announced an additional humanitarian aid of €1.65 million to India, Nepal and Bangladesh - the three South Asian countries where massive floods were reported in the ongoing Monsoon season. The funds would be dispatched at the earliest, said a statement issued by the conglomerate.

"The support comes on top of the €1.8 million announced earlier this year to support families affected by a series of disasters, including Cyclone Amphan that ravaged India and Bangladesh, bringing the total EU support to victims of disasters in the region to €3.45 million," it further said.

Heavy rainfall, which triggered floods and landslide in Myagdi district of western Nepal claimed at least 132 lives and affected around 1,000 families.

In Bangladesh, the death toll due to the incessent rainfall and floods was estimated at 162, as per the latest updates. The country's disaster management body feared that the fatality count could further rise as several people continue to remain missing in the flood-affected regions.

In India, the north eastern state of Assam and eastern province of Bihar were worst-affected due to the floods. While Assam reported a total of 107 deaths, the fatality count in Bihar was reported as 23, as per the latest update. A total of 70 lakh families in the state were affected.

(The above story first appeared on LatestLY on Aug 11, 2020 03:31 PM IST. For more news and updates on politics, world, sports, entertainment and lifestyle, log on to our website latestly.com).