Witnesses told AFP that both bombings were suicide attacks by assailants on motorbikes, but there was no official confirmation. A source familiar with the investigation said a Salafist movement in Gaza, which is run by Islamist movement Hamas, that sympathises with the Islamic State jihadist group was suspected. 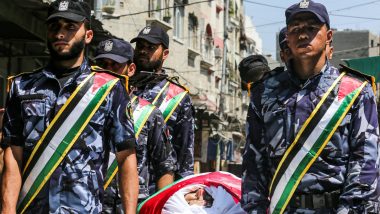 Gaza City, August 28: Hamas said Wednesday that two overnight bombings killed three Palestinian police officers in the Gaza Strip in what witnesses called suicide attacks as the Palestinian enclave was placed under a state of alert. Witnesses told AFP that both bombings were suicide attacks by assailants on motorbikes, but there was no official confirmation. A source familiar with the investigation said a Salafist movement in Gaza, which is run by Islamist movement Hamas, that sympathises with the Islamic State jihadist group was suspected. Israel Launches Airstrikes in Gaza in Response to Rocket Attack.

Hamas's interior ministry confirmed the three deaths, but spoke only of two "bombings" in Gaza City without providing details. It said two of the police officers were 32 and the third was 45. Two separate police checkpoints were targeted, it said. An investigation was underway as authorities pledged to track down the "masterminds". New police checkpoints were set up in Gaza City.

Hamas leader Ismail Haniya sought to reassure Palestinians in the enclave of two million people. "We assure our people that whatever these explosions are, they will be brought under control as with every previous event, and will not be able to undermine the stability and steadfastness of our people," he said in a statement. Hundreds gathered for funerals for the three police officers.

Suicide bombings are rare in the Gaza Strip. In August 2017, a suicide bomber killed a Hamas guard in southern Gaza on the border with Egypt.

Hamas has run the Gaza Strip since 2007 but has been regularly criticised by more radical Salafist groups in the impoverished, Israeli-blockaded coastal territory. The Israeli military said it had not carried out any air raids at the time of the latest bombings.

The bombings come at a sensitive time. Israel and Hamas have fought three wars since 2008 and tensions have again risen in recent weeks ahead of Israel's September 17 elections. Israel's military on Tuesday bombed a Hamas military post after militants in the strip fired a mortar round across the border, the latest in a string of such incidents this month. On Monday, Israel launched air strikes against Hamas in response to rocket fire, while it also halved fuel deliveries to the enclave. Israeli Missile Strikes Near Damascus, 4 Killed, 21 Injured, Says Syria.

The punitive reduction in the flow of fuel to the strip's main power station means a cut in Gaza's already rationed electricity supply. The incidents have threatened a fragile truce that had cooled several severe flare-ups between Hamas and Israel in recent months. Brokered by UN and Egyptian officials, the ceasefire also involves aid to the Gaza Strip from Qatar. Israeli Prime Minister Benjamin Netanyahu is widely seen as wanting to avoid an escalation in Gaza before the polls due to the political risk involved, but he has faced calls for strong action from his electoral opponents.

As a result, there has been speculation in Israel that Hamas has turned a blind eye to recent rocket fire and infiltration attempts by more radical elements instead of preventing them in a bid to pressure Netanyahu into further concessions. Hamas has not claimed responsibility for the recent cross-border incidents. Other militant groups, most prominently Islamic Jihad, also operate in the Gaza Strip.

(The above story first appeared on LatestLY on Aug 28, 2019 04:34 PM IST. For more news and updates on politics, world, sports, entertainment and lifestyle, log on to our website latestly.com).