"Right now, because we think so much about Christmas and the turn of the year ahead, I wish, and I wish all of us, that we stand up for each other more than ever," Merkel said. "If we take this to heart, we will get out of this crisis," she added. 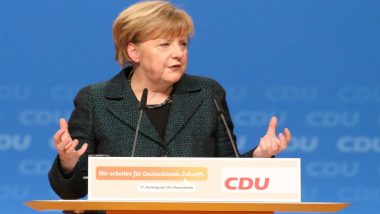 Berlin, November 27: German Chancellor Angela Merkel has confirmed the extension of a partial Covid-19 lockdown in the country until mid-December due to a surge in the number of new confirmed cases. Addressing the Bundestag, lower house of the German Parliament, Merkel said on Thursday: "We have without a doubt another difficult few months ahead of us," Xinhua news agency reported.

During the pandemic, "each and every one of us can actively contribute so that we can get through this time well", she added. Following the recent resurgence, the federal and state governments decided on Wednesday that the partial lockdown, including the closure of restaurants, bars, theatres and leisure facilities, would be extended until December 20. #Lockdown2 Funny Memes on France and Germany Entering 2nd Phase of Coronavirus Restrictions Describe Every Indians Mood With Hilarious Jokes.

Private meetings with friends and families will be limited to five people from two households, according to the government. An exception would be made during the Christmas holidays, when gatherings with relatives or friends should be limited to ten people. Merkel urged her compatriots again to avoid any unnecessary social contact and travel.

In the wake of the approaching ski season, Merkel argued that ski resorts could turn into coronavirus "super-spreading" hotspots and should thus all be closed. "We will try to reach an agreement in Europe" on this, Merkel said, adding that this will not be easy.

With Germany's current measures, which were introduced at the beginning of November, the "dramatic exponential growth" of new cases had been stopped, but the figures were still "too high", the Chancellor further said.

On Thursday, the country reported 22,268 new cases, which increased the overall tally to 1,005,307, according to the Robert Koch Institute (RKI). The daily fatality rate also remained high and increased by 389 in 24 hours to a total of 15,210, the RKI revealed. The highest level to date was recorded on Wednesday, when the previous peak of 315 Covid-19 deaths from the first wave of infections had exceeded.

The goal is to reduce the number of infections to enable local health authorities to once again trace and break infection chains, and to reach an incidence rate of less than 50 per 100,000 inhabitants in seven days, according to the government.

"Right now, because we think so much about Christmas and the turn of the year ahead, I wish, and I wish all of us, that we stand up for each other more than ever," Merkel said. "If we take this to heart, we will get out of this crisis," she added.

(The above story first appeared on LatestLY on Nov 27, 2020 10:49 AM IST. For more news and updates on politics, world, sports, entertainment and lifestyle, log on to our website latestly.com).