Hamza, 30, last featured in a video released by terror group Al Qaeda. The footage, uploaded by the outfit's media arm, showed him "instigating" the Saudi monarch and charging the regime led by Crown Prince Mohammed bin Salman of being 'anti-Islamic'. 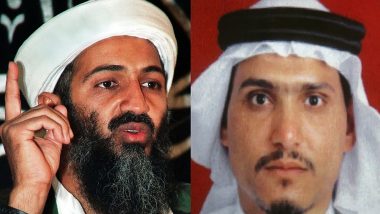 Washington, July 31: Hamza bin Laden, often referred to as the "Crown Prince of Jihad", is "dead", the American media reported on Wednesday citing the latest US Intelligence report. The report of his death comes months after the United State announced a reward of 1 million dollars on Hamza, who had called for a "revolution" in Saudi Arabia.

Hamza's location was yet to be confirmed, but reports claimed that he was based in the war-torn territory of Afghanistan where Al Qaeda continues to wield influence.

Osama bin Laden, the deceased's father, was killed in 2011 in a coveted midnight operation carried out by the US Navy Seals in Pakistan's Abbottabad.

Osama was charged by the US of being the chief mastermind of the 9/11 terror attack. The fatal assault was carried out on September 11, 2001 when Al-Qaeda operatives hijacked four passenger planes which rammed into the World trade Centre in New York's Manhattan. Nearly 3,000 civilian lives were lost and over 6,000 left injured.

(The above story first appeared on LatestLY on Jul 31, 2019 11:58 PM IST. For more news and updates on politics, world, sports, entertainment and lifestyle, log on to our website latestly.com).