Pakistan Prime Minister Imran Khan won the vote of confidence from the parliament on Saturday. 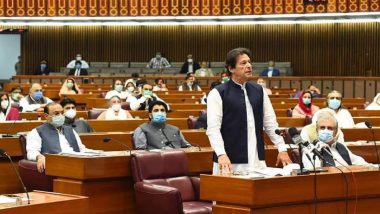 Khan required the support of a simple majority of 172 lawmakers in the National Assembly, according to Article 91(7) of Pakistan's Constitution. However, since a seat lies vacant after its by-election results were nullified by the Election Commission of Pakistan, he needed the support of 171. He is the second Prime Minister in the history of Pakistan who sought a "voluntary" vote of confidence. Emmanuel Macron Has Attacked Islam and Hurt Sentiments of Muslims: Pakistan PM Imran Khan Over Prophet's Cartoon Row in France.

Khan sought a vote of confidence from the parliament after the ruling PTI lost the hotly contested Senate general seat from Islamabad to the joint opposition. The joint opposition candidate, Yousuf Raza Gilani, won the seat beating PTI's Abdul Hafeez Shaikh. Gilani secured 169 votes while Shaikh bagged 164 votes. This came as a shock to Khan as some of his party members in the Senate voted for Gilani.

Opposition parties said that the PTI candidate's defeat had symbolically proved Khan lost confidence of the Upper House. Khan, in damage control mode, then sought a "voluntary" vote of confidence. Prior to PM Khan, Nawaz Sharif had sought a voluntary vote of confidence after his reinstatement was granted by the Supreme Court in 1993.

(The above story first appeared on LatestLY on Mar 06, 2021 02:18 PM IST. For more news and updates on politics, world, sports, entertainment and lifestyle, log on to our website latestly.com).