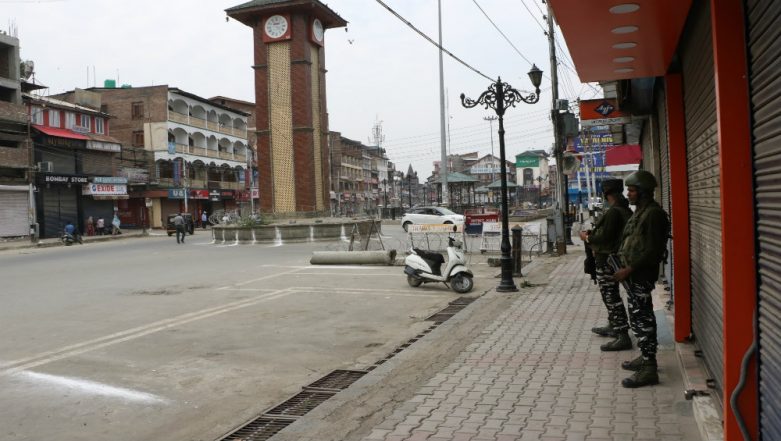 New York, August 23: Days after India scrapped the special status of Jammu and Kashmir under Article 370 of Indian Constitution, UN human rights experts asked New Delhi to end "the crackdown on freedom of expression" and communication blackout in the state. The UN experts expressed concerns on the deployment of troops in large numbers in Jammu and Kashmir, adding that "detention" of people could have ramifications.

Asking the Indian government to end communication blackout, the experts said: "The shutdown of the internet and telecommunication networks, without justification from the Government, are inconsistent with the fundamental norms of necessity and proportionality. The blackout is a form of collective punishment of the people of Jammu and Kashmir, without even a pretext of a precipitating offence." Read UN Human Rights Experts' Report on Jammu and Kashmir Here.

"We remind the Indian authorities that the restrictions imposed by the Indian Government are intrinsically disproportionate, because they preclude considerations of the specific circumstances of each proposed assembly," they added. The experts also expressed serious concerns about "house arrest of political leaders, separatists, local journalists and activists". "Such detentions could constitute serious human rights violations," they said. Jammu And Kashmir: After Revocation of Article 370, Government Plans For Delimitation of Assembly Seats.

“The shutdown of the internet & telecommunication networks, without the Government justification, are inconsistent with the fundamental norms of necessity & proportionality."https://t.co/BBx9zmBGQG pic.twitter.com/zq9yIZfOoH

The experts said there are reports of that security forces were conducting night raids on private homes leading to the arrests of young people. "We are gravely concerned about allegations that the whereabouts of some of those detained is not known as well as the general heightened risk of enforced disappearances, which may proliferate against the backdrop of mass arrests and restricted access to the internet and other communications networks," they said. Emmanuel Macron Says He Discussed Kashmir With PM Narendra Modi, Will Tell Imran Khan to Resolve Issue Bilaterally.

They also expressed serious concern about "the use of excessive force against protesters", saying: India has the responsibility to use the minimum force necessary when policing protests. This means that the use of deadly force is a measure permissible only as last resort and to protect life."

Jammu and Kashmir has remained under a  communication blackout since August 5, when the Centre moved to end the special status of the state and bifurcated the state into two union territories - Jammu and Kashmir with a legislature, and Ladakh without one. Several political leaders of the state have been placed under house arrest since then. While normalcy is returning in some parts, the Valley remains under curfew.

The United Nations Human Rights Council is a United Nations body which flags violations of human rights granted under the Universal Declaration of Human Rights in various parts of the world. The UN body has several times called out "civilian killings", use of pellet guns and "harassment and torture of Kashmiris".