The operator of Japan's crippled Fukushima No. 1 nuclear power plant has confirmed that four tonnes of coolant had leaked from two storage tanks, local media reported on Monday. 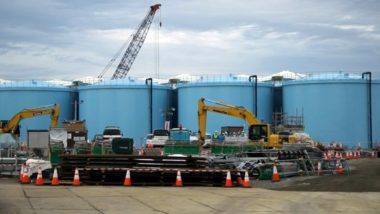 Tokyo, Jan 24: The operator of Japan's crippled Fukushima No. 1 nuclear power plant has confirmed that four tonnes of coolant had leaked from two storage tanks, local media reported on Monday.

The coolant was used to create an ice wall refraining groundwater from seeping into reactor buildings, according to the Tokyo Electric Power Company Holdings Inc. (TEPCO).

"We're now confirming the reason," he said, according to the Japan Times.

The leakage was discovered on January 16 near the ice wall. There may be damage to the ice pipes in the wall and the company will seek to repair the damage, according to TEPCO.

There was no immediate impact on the wall's function, as it takes several months for the wall to thaw in the absence of coolant, Shiraishi said.

Although the company said the leakage has made no impact on the wall or the environment, it posed more potential danger and unpredictable challenges in the clean-up of the site, nearly 11 years after the massive earthquake and tsunami disaster on Japan's northeastern coast.

The last leak took place in December 2019 with 16 tonnes spilled, likely due to metal fatigue resulting from vibrations caused by construction vehicles, according to the company.

(The above story first appeared on LatestLY on Jan 24, 2022 03:10 PM IST. For more news and updates on politics, world, sports, entertainment and lifestyle, log on to our website latestly.com).