Kim Jong Un at a Luxury Coastal Resort in North Korea? Recent Satellite Images Indicate Movements of the His Boats There, Says Experts 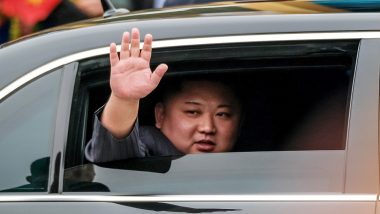 Seoul, April 30: The recent satellite images indicate that North Korean leader  Kim Jong Un might be at a luxury coastal resort on the Hermit Kingdom's northeast coast. According to experts, recent movements of luxury boats often used by Kim and his entourage were seen near Wonsan provide. This comes amid speculations about his health which started after his absence from April 15 celebrations to mark the birthday of his late grandfather and North Korea's founder, Kim Il Sung.

There have been various reports on the media lately about Kim's deteriorating health. From a cardiovascular procedure gone wrong to him being infected with COVID-19. According to some US media reports, the North Korean leader was brain dead. However, the National Security Council and Office of the Director of National Intelligence declined to comment on the matter. Social media was gripped by another hoax related to North Korea's Supreme Leader, as photoshopped images of "his funeral" went viral.

Following the news of the poor health condition of the North Korea leader, there were reports that Donald Trump administration officials are reportedly looking into who would be in the line of succession if Kim Jong Un dies or is already dead.

(The above story first appeared on LatestLY on Apr 30, 2020 08:17 AM IST. For more news and updates on politics, world, sports, entertainment and lifestyle, log on to our website latestly.com).