Sanchez postponed a planned visit to New York and flew to the island on Monday after the Cumbre Vieja volcano erupted on Sunday afternoon, spewing lava from a series of vents that opened after over 20,000 seismic events in the preceding week, reports Xinhua news agency. 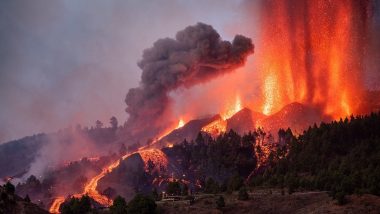 Madrid, September 21: Spanish Prime Minister Pedro Sanchez confirmed that human lives were not at risk due to the eruption of a volcano on the island of La Palma. Sanchez postponed a planned visit to New York and flew to the island on Monday after the Cumbre Vieja volcano erupted on Sunday afternoon, spewing lava from a series of vents that opened after over 20,000 seismic events in the preceding week, reports Xinhua news agency.

Televised images showed lava spewing hundreds of feet and also trickling down the crater, prompting the evacuation of over 5,000 people from the nearby municipalities of El Paso, Tazacorte and Los Llanos de Aridane. Speaking to journalists following his arrival, Sanchez insisted that "people's safety is guaranteed".

"We have to explain to the citizens of La Palma that their safety is guaranteed. We have been working for a week in anticipation of how to act when the eruption occurred," Sanchez said. "Civil guards, police, fire brigade, Red Cross and the Spanish Military's Emergency Response Unit" have all been deployed to the island, he added. Volcano Erupts on Canary Island of La Palma in Spain (Watch Video).

Speaking on Spanish national radio station RNE earlier on Monday, Angel Victor Torres, regional president of the Canary Islands, said that "houses have been affected, although we don't know how many" by the eruption.

Torres said the eruptions from the volcano would continue, and "in 48 hours we will know how long it will last", although he added that he did not expect it to be a short eruption. He explained that there were "two rivers of lava flowing to the sea, and they could join together".

Nemesio Perez, the director of the Volcanology Institute of the Canary Islands (INVOLCAN), predicted that the eruption could last for "weeks or a few months", with the exact duration determined by the amount of magma that has accumulated in the volcano's "reservoir". Volcano Erupts on Spain’s Atlantic Ocean Island of La Palma; Lava Destroys Some Homes.

"It could be three or five km deep and connected to another reservoir of 20 to 30 km and the fact that this could feed the original source could mean that the eruption lasts longer," Perez said. La Palma has a surface area of just over 700 square km and a population of almost 85,000 people.

The area has experienced seven recorded eruptions since records began. The last two eruptions were in 1949 and 1971, with the latter one lasting 10 days. A man was killed got too close to a lava flow while taking photographs.

(The above story first appeared on LatestLY on Sep 21, 2021 05:02 PM IST. For more news and updates on politics, world, sports, entertainment and lifestyle, log on to our website latestly.com).