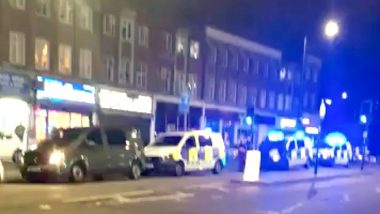 London, Aug 21: Three persons have been injured in a shooting incident outside an underground station in London, the police said. "Officers are at the scene of a shooting in Kingsbury Road on Monday. Not terror related. Three people taken to hospital, none believed to be life-threatening," London Metropolitan Police said on its Twitter account, Xinhua news agency reported. A spokesman for the Metropolitan Police said: "Police and London Ambulance Service were alerted at around 9.45 p.m. to reports of shots fired in Kingsbury Road, NW9. The police said roads are closed and there has been no arrest so far. London Ambulance Service confirmed three patients have been rushed to hospital with injuries. A spokesperson said: "We were called at 9.43 p.m. to reports of an incident on Kingsbury road. We dispatched a number of resources including London Air Ambulance by road."

"Three patients were found at the scene and they were taken to hospital." Kingsbury Tube station on the Jubilee line was shut down while the police carried out an investigation outside the station, Transport for London announced on its website. The shooting came just hours after shots were fired outside a school in west London, Daily Mail reported. According to the report, armed police were dispatched after witnesses reported hearing three gunshots outside the Kennet West Skills Centre. No one was injured and no arrests were made at the earlier incident and the Metropolitan Police said it was too early to confirm whether the two incidents were related.

(The above story first appeared on LatestLY on Aug 21, 2018 08:46 AM IST. For more news and updates on politics, world, sports, entertainment and lifestyle, log on to our website latestly.com).