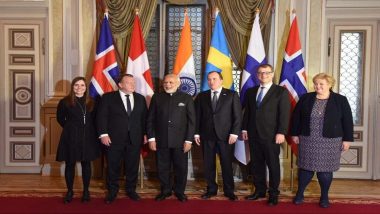 The Statement said, “The Nordic countries welcomed India’s application for membership to the Nuclear Suppliers’ Group and reaffirmed their commitment to work constructively within the Group with the aim of reaching a positive outcome at the earliest opportunity.” India and the Scandinavian  nations discussed various issues at the summit. The northern European states vowed to deepen cooperation with India on issues related to global security, economic growth, innovation and climate change at the Summit. The Summit was attended by Prime Minister Narendra Modi.

“The Summit emphasised India’s strong commitment to innovation and digital initiatives as key to prosperity and sustainable development, with national flagship programmes such as Make in India, Startup India, Digital India and Clean India,” said the statement. The Prime Ministers of all the nations who attended the Summit acknowledged that terrorism and violent extremism were the major challenges for the international community. The leaders discussed global security, including cyber security, based on their shared values of human rights, democracy and the rule of law.

Apart from this Summit PM Modi also had discussions with Sweden's Prime Minister Stefan Lofven.  Both the countries agreed to work on a deal for strengthening their relations in terms of defence co-operation. This would probably open gates for Saab to secure $15 billion deal to supply 110 fighter jets to the Indian Air Force (IAF).

After the Summit PM Modi embarked on his visit to United Kingdom (UK) to attend Commonwealth Heads of Government Meeting (CHOGM) in London. The Prime Minister will have both bilateral and multilateral meetings with the heads of various nations.  Prime Minister Narendra Modi met his UK counterpart Theresa May today. Both the leaders discussed way to strengthen ties between India and UK.

(The above story first appeared on LatestLY on Apr 18, 2018 08:46 PM IST. For more news and updates on politics, world, sports, entertainment and lifestyle, log on to our website latestly.com).