The people of Pakistan, including political leaders, were surprised when Prime Minister Imran Khan praised his Indian counterpart Narendra Modi's foreign policy before a crowd of thousands of supporters. 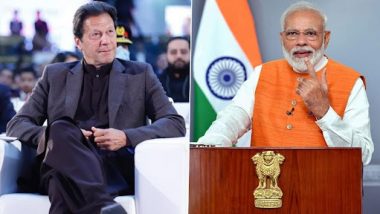 "I would like to praise our neighbouring country Hindustan for its foreign policy. India's foreign policy is free and independent, and its only aim is for the betterment of its own people." Pakistan: Opposition Leaders Accuse PM Imran Khan of Staging Conspiracy Drama Ahead of No-Confidence Motion.

"It is amusing to note that Imran Khan, who, at one point of time, used to deride Narendra Modi as Hitler and Nazi leader at international forums, has now praised his foreign policy, at a time when his government is on the verge of collapse," The News said in its report.

"Modi established friendly relations with countries like Saudi Arabia, UAE, Bahrain, Oman and Jordan, which were traditional friends of Pakistan. Saudi Arabia has stopped giving loans to Pakistan, and UAE has stopped raising the Kashmir issue despite prodding from Pakistan.

"Most of the Islamic nations have now changed their attitude towards India and the situation has come to such a pass that even opposition leaders in Pakistan have now started asking their Prime Minister not to give Modi's examples. These opposition leaders allege that the world is now laughing at Pakistan because of Imran Khan's incompetence," says the report.

Indian Foreign Secretary Harsh Vardhan Shringla reacted to Khan's remark by saying: "India has received across the board praise from different countries for its foreign policy, and our record speaks for itself. It would be wrong to say that only one leader has praised India's foreign policy."

(The above story first appeared on LatestLY on Apr 02, 2022 01:51 PM IST. For more news and updates on politics, world, sports, entertainment and lifestyle, log on to our website latestly.com).