Amidst the political turmoil, Pakistan Army chief Gen Qamar Javed Bajwa is reported to have met Prime Minister Khan this week. Asked whether the Opposition, government or "another party" had proposed early elections and his resignation as options, the prime minister told ARY News that he was presented with the three options. 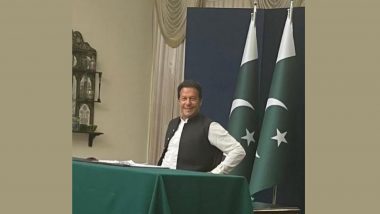 Islamabad, April 2: Pakistan's embattled Prime Minister Imran Khan has said that the “establishment” had given him three options: "resignation, no-confidence (vote) or elections" after the Opposition filed a no-trust motion against him in Parliament.

Khan, however, did not elaborate what he meant by “establishment”.

The powerful Pakistan Army, which has ruled the coup-prone country for more than half of its 73 plus years of existence, has hitherto wielded considerable power in the matters of security and foreign policy.

Amidst the political turmoil, Pakistan Army chief Gen Qamar Javed Bajwa is reported to have met Prime Minister Khan this week. Asked whether the Opposition, government or "another party" had proposed early elections and his resignation as options, the prime minister told ARY News that he was presented with the three options.

"We said elections are the best option, I cannot even think about resigning and as far as the no-confidence vote is concerned, I believe in fighting till the end," the 69-year-old cricketer-turned-politician said. Pakistan Army Chief Qamar Bajwa Says 'All Disputes with India Should Be Settled Peacefully Through Dialogue'.

Pointing out that several members of the Pakistan Tehreek-e-Insaf (PTI) had defected to the Opposition ahead of the no-trust vote on Sunday, Khan said that even if the no-trust move failed, "We cannot run the government with such people (defectors)."

Hence, "it will be better for Pakistan if we hold elections again," he was quoted as saying by the Dawn newspaper. Asked whether he was prepared to go for early elections, he replied, "If we win [in] this [no-confidence] vote, it is a very good idea to go for early elections." "We will make a strategy” in case the Opposition's no-trust motion fails, he added.

The prime minister also termed the Opposition parties, Pakistan Muslim League-Nawaz (PML-N) and Pakistan Peoples Party (PPP), as a “disgrace" to the country and said it was due their policies in the past that a foreign power was openly calling for regime change in Pakistan.

Khan's address to the nation on Thursday came at a critical juncture of his political career when he lost majority after defection from his PTI party. Two of his allied parties also withdrew their support and joined the ranks of the Opposition. Pakistan PM Imran Khan Faces Flak for Praising PM Narendra Modi’s Foreign Policy.

The prime minister has said that he will play till the last ball and the no-trust vote on Sunday will decide where the country will go. Khan needs 172 votes in the lower house of 342 to foil the Opposition's bid to topple him. However, the Opposition claims it has the support of 175 lawmakers and the prime minister should immediately resign.

No Pakistani prime minister has ever completed a full five-year term in office. Also, no prime minister in Pakistan's history has ever been ousted through a no-confidence motion, and Khan is the third premier to face the challenge.