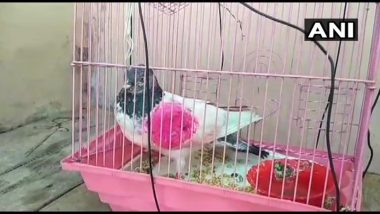 Sialkot, May 27: Two days after a pigeon, suspected to be trained in Pakistan for spying, was captured in Jammu and Kashmir's Kathua district, a Pakistani villager claimed that the bird was his pet. According to a report in Pakistani newspaper Dawn, Habibullah denied that his pet was involved in any spying operations. “Yes, this is my pet pigeon as it can never be a spy or a terrorist,” he told the newspaper. Pigeon, Suspected to be 'Spy' from Pakistan, Captured Along IB in Jammu and Kashmir's Kathua.

Habibullah, a resident of Bagga-Shakargarh village, said that the pigeon was a "symbol of peace" and said that code on the bird is actually his mobile phone number. He said that he had flown several pigeons to celebrate the Eid festival. He urged Prime Minister Narendra Modi to return the bird.

On May 25, a pigeon was captured by the residents of Manyari village in Hiranagar sector after it flew into Indian side along the International Border (IB) from Pakistan. The pigeon was also carrying a "coded message".

"The villagers handed over the pigeon (to the local police station). A ring was seen attached to one of its legs with some numbers on it and a probe is on," Senior Superintendent of Police of Kathua Shailendra Mishra had said.

(The above story first appeared on LatestLY on May 27, 2020 09:42 PM IST. For more news and updates on politics, world, sports, entertainment and lifestyle, log on to our website latestly.com).