States in the US are in the path of a spinning blast of extremely cold wind known as the polar vortex, which could bring temperatures down to as low as -46 degrees C. 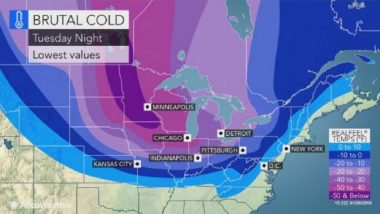 Representation of the polar vortex winds hitting the US (Photo: Accuweather)

Toronto, January 29: The United States is facing a once-in-a-decade cold weather as its northern and mid-western states will be hit on Wednesday by a spinning blast of extremely cold wind known as the polar vortex. This deep freeze could bring temperatures down to as low as -46 degrees C. The local authorities have issued a state of emergency from Wisconsin down to Alabama. The states will feel the brunt of this extremely cold weather in the next 24 hours as temperatures are expected to plummet on Wednesday, with forecasters predicting that Chicago will be colder than Antarctica.

Wind chill factors could lead to the mercury plummeting anywhere between 30-60 degrees below zero this week in parts of the northern Plains and Great Lakes region.

A polar vortex is a large pocket of very cold air, the coldest air in the Northern Hemisphere, which sits over the polar region during the winter season. The frigid air when pushed down south, occasionally reaches southern Canada and the northern Plains, Midwest and northeastern portions of the United States.

Governments have issued closure orders for thousands of schools and businesses, as have a number of government agencies. Over 1,600 flights have been cancelled for Tuesday and Wednesday. More than 760 flights in to and out of Chicago airports have been cancelled due to inclement weather, according to FlightAware.com.

Illinois Gov. J. B. Pritzker declared a state of emergency, saying even a brief time outside with exposed skin can be life-threatening. "There is a real risk of hypothermia and frostbite," Pritzker said Tuesday. "Even five minutes of exposure can have very severe health consequences." Residents have been warned not to take deep breaths when outside and not to expose themselves to the wind for more than 10 minutes.

Wisconsin Governor Tony Evers also declared a state of emergency. "I want to make sure all state assets are available, including Wisconsin National Guard if needed, to help communities across the state and keep people warm and safe," Evers tweeted.

(The above story first appeared on LatestLY on Jan 31, 2019 11:26 AM IST. For more news and updates on politics, world, sports, entertainment and lifestyle, log on to our website latestly.com).