The Defence Ministry said that the initial aims of the war were complete, and that Russia had reduced the combat capacity of Ukraine. 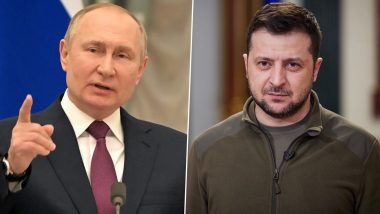 Moscow, March 26 (IANS) Russia says it will focus its invasion of Ukraine on "liberating" the east, signalling a possible shift in its strategy, the BBC reported.

The Defence Ministry said that the initial aims of the war were complete, and that Russia had reduced the combat capacity of Ukraine. Russia-Ukraine War: No Consensus With Russia on 4 Points Mentioned by Turkish President, Says Ukrainian Foreign Minister Dymtro Kuleba.

"The main tasks of the first stage of the operation have been carried out," said Sergei Rudskoy, head of the General Staff's main operations administration.

"The combat capabilities of the Ukrainian armed forces have been substantially reduced, which allows us to concentrate our main efforts on achieving the main goal: the liberation of Donbas," he added, referring to an area in eastern Ukraine largely in the hands of Russian-backed separatists.

Russia's military has been bombarding and trying to encircle key Ukrainian cities such as the capital Kiev, which Gen Rudskoy characterised as an attempt to tie down Ukraine's forces elsewhere in the country while Russia focuses on the east, the BBC reported.

Ukrainians President Volodymyr Zelensk, said his troops had landed "powerful blows" on Russia and called on Moscow to recognise the need for serious peace talks.

"By restraining Russia's actions, our defenders are leading the Russian leadership to a simple and logical idea: talk is necessary. Meaningful. Urgent. Fair. For the sake of the result, not for the sake of the delay," he said.

(The above story first appeared on LatestLY on Mar 26, 2022 12:45 PM IST. For more news and updates on politics, world, sports, entertainment and lifestyle, log on to our website latestly.com).