Erdogan told reporters that Moscow and Kiev were close to an agreement the four issues -- Ukraine's accession to NATO; recognition of the Russian language as the second official language in Ukraine; demilitarisation; and collective security. 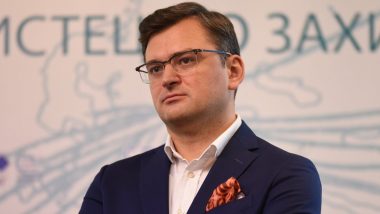 Kiev, March 26: Ukrainian Foreign Minister Dymtro Kuleba said there has been no consensus with Russia on the four points of negotiations mentioned by Turkish President Recep Tayyip Erdogan.

"There is no consensus with Russia regarding the four points mentioned by the Turkish President. In particular, the only state language in Ukraine is Ukrainian and will remain so. And in general the classification of key negotiation topics into four points, or any other number, is inappropriate," Kuleba told Ukrayinska Pravda on Friday. Eliot Cutler, Ex-Candidate for Maine Governor, Arrested for Possessing Child Pornography.

Earlier in the day, Erdogan told reporters that Moscow and Kiev were close to an agreement the four issues -- Ukraine's accession to NATO; recognition of the Russian language as the second official language in Ukraine; demilitarisation; and collective security.

But the Russian demands on the future status of Crimea and the eastern Donbas region continue to be the most important disagreement in negotiations, Xinhua news agency quoted the Turkish leader as saying.

Last week, Erdogan had renewed his offer to bring the leaders of Russia and Ukraine together in Turkey for final decisions on these topics.

In further remarks to Ukrayinska Pravda, Kuleba said his country's delegation to the peace talks with Russia has taken a strong stance and is not backing down from its demands.

He stressed that Ukraine is insisting first and foremost on a ceasefire, on guarantees of security and of Ukraine's territorial integrity.

The Foreign Minister also noted that Ukraine will continue its dialogue with Turkey and all interested parties in order to restore peace.

"We hope that Turkey, as a friend and strategic partner of Ukraine, will also continue with its support on all tracks. I would also like to take this opportunity to remind you that imposing new sanctions on Russia and strengthening Ukraine's defence capabilities are equally important factors to stop the Russian war machine and achieve the desired progress in the negotiations.

"This tripartite strategy - sanctions, military support, negotiations - should not be called into question by anyone", he added.

(The above story first appeared on LatestLY on Mar 26, 2022 11:10 AM IST. For more news and updates on politics, world, sports, entertainment and lifestyle, log on to our website latestly.com).