Turkey will no longer classify animals as commodities under a highly anticipated animal-rights bill presented to Parliament after years of efforts from activists and people involved in animal welfare. 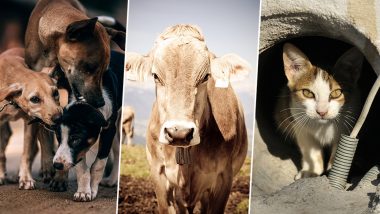 Ankara, July 4:  Turkey will no longer classify animals as commodities under a highly anticipated animal-rights bill presented to Parliament after years of efforts from activists and people involved in animal welfare.

The bill submitted on June 30 by the ruling Justice and Development Party (AKP) is expected to be enacted into law in the coming weeks after deliberations by lawmakers, parliamentary sources told Xinhua on Saturday. Naked Animal Rights Activists Covered In Fake Blood Protest Against Meat Consumption In Spain's Madrid ( Watch Video)

The issue of animal rights has been on the Turkish government's agenda over the past decade due to public pressure on politicians to come up with a solution.

The current bill defines animals as "commodities", denying them any rights.

Any act of torture or killing of a stray animal in the country is punishable under "damage to commodities" with a small fine.

However, the new legislation will redefine them as living beings and seek jail time for anyone who kills, abuses, or tortures animals.

In recent years cruelty cases against animals, particularly stray dogs or cats, have made headlines, prompting the AKP and other political parties to seek stricter action against perpetrators.

Last month, a man living in Istanbul, Turkey's largest city, was fined for killing and eating stray kittens that residents of his neighbourhood were feeding, local press reported.

"The good thing is that their crimes will go on the records of offenders," Pelin Sayilgan, the Ankara representative of the Turkish Animal Right Federation, Haytap, told Xinhua.

"We had demanded the banning of zoos, circus animals, fur farms, and pet stores, but the new legislation doesn't include those facts," she said.

Citizens believe that the new legislation will deter people from engaging in brutality against animals.

The punishment for crimes against animals will be a jail term ranging from six months to four years, which will prevent criminals from getting out on bail or converting the prison sentence to a fine.

Under the new law, local police can establish animal protection squads to respond to any incidents in which an animal is harmed or in danger.

The force will also actively seek out perpetrators of blood sports involving animals, such as cockfighting and dog fighting, popular in some parts of Turkey.

(The above story first appeared on LatestLY on Jul 04, 2021 12:26 PM IST. For more news and updates on politics, world, sports, entertainment and lifestyle, log on to our website latestly.com).