Reacting to Russia's allegations that biological weapons were made in Ukrainian laboratories, President Volodymyr Zelensky has said that "no chemical or any other weapons of mass destruction were developed" in his country. 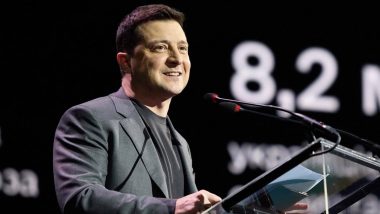 Kiev, March 11: Reacting to Russia's allegations that biological weapons were made in Ukrainian laboratories, President Volodymyr Zelensky has said that "no chemical or any other weapons of mass destruction were developed" in his country.

In his latest video address posted on Facebook on Friday morning, Zelensky said: "I am the President of an adequate country, an adequate nation. And the father of two children. And no chemical or any other weapons of mass destruction were developed on my land. "The whole world knows that. You know that. And if Russia do something like that against us, it will get the most severe sanctions response." Google To Send Air Raid Alerts to Android Users in Ukraine.

Responding further to Russia's claims that "recently found documents" showed components of biological weapons were made in Ukrainian laboratories with funding from the US Department of Defense, the President said that "this makes me really worried, because we've been repeatedly convinced: if you want to know Russia's plans, look at what Russia accuses others of (doing)".

"What are these allegations of preparing chemical attacks? Have you decided to carry out 'de-chemicalisation' of Ukraine? Using ammonia? Using phosphorus? What else have you prepared for us?" he questioned Russia which has continued to wage its war against Ukraine for 16 days now.

In its latest allegation, the Russian Defence Ministry claimed on Thursday that the US was helping Ukraine to develop biological weapons and use virus-carrying birds that migrate through Russia, the BBC reported.

The Ministry, however did not provide any evidence to support the claim. Earlier, Russia had claimed that more than 30 laboratories in Lviv, Kharkiv and Poltava were working with dangerous infectious agents as part of a US-led military biological programme.

Meanwhile, Dmitry Polyansky, Russia's deputy ambassador to the UN, requested the world body to convene an emergency Security Council meeting on Friday to "discuss the military biological activities of the US on the territory of Ukraine".

The US has called the allegations "preposterous", with White House Press Secretary Jen Psaki saying in a tweet on Wednesday that it is the "kind of disinformation operation we've seen repeatedly from the Russians over the years in Ukraine and in other countries, which have been debunked".

She said "we should all be on the lookout for Russia to possibly use chemical or biological weapons in Ukraine, or to create a false flag operation using them. It's a clear pattern".

While testifying to the US Senate Intelligence Committee earlier on Thursday, CIA Director William Burns described Russia's accusations as "false flag efforts in the creation of false narratives".

(The above story first appeared on LatestLY on Mar 11, 2022 10:35 AM IST. For more news and updates on politics, world, sports, entertainment and lifestyle, log on to our website latestly.com).