Ukraine is releasing inmates and criminal suspects with a military background so they can join the fight against Russia's "special operation" in the country, an official in Ukraine's Prosecutor General's office said on Sunday, RT reported. 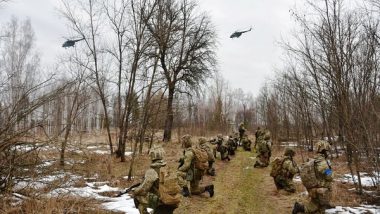 New Delhi, February 27: Ukraine is releasing inmates and criminal suspects with a military background so they can join the fight against Russia's "special operation" in the country, an official in Ukraine's Prosecutor General's office said on Sunday, RT reported.

Moscow attacked its neighbour on Thursday, arguing it was defending the Donetsk and Lugansk People's Republics, which broke off from eastern Ukraine shortly after the 2014 coup in Kiev. Ukraine condemned the move, claiming it was an act of unprovoked aggression. Anastasiia Lenna, Former Miss Ukraine, Takes Up Arms To Fight Off Russian Army? Photoshoot With ‘Air Soft Rifle’ Goes Viral (See Pics).

Service record, combat experience, and repentance are among the factors considered in each individual case, Andriy Sinyuk, a prosecutor at the Prosecutor General's office told a TV channel on Sunday. "It's a complicated issue decided at the highest level," he said, the report said.

Sinyuk was quoted as saying that Sergey Torbin, a former combat veteran, was one of the inmates released. Torbin previously fought in the conflict with the DPR and LPR. He was jailed for six years and six months in 2018 for his role in the murder of civil rights activist and anti-corruption campaigner Kateryna Handziuk, RT reported. The woman was doused with acid in July 2018 on a street outside her home and died in the hospital with severe burns later that year.

Sinyuk said Torbin handpicked former inmates for his squad after his early release. He added that another ex-serviceman, Dmitry Balabukha, sentenced to nine years in jail for stabbing a man to death at a bus stop after an argument in 2018, had also been released, RT reported. The Ukrainian government is actively arming civilians as Russian forces are approaching its capital. The media reported renewed fighting in Kiev's outskirts on Sunday.

(The above story first appeared on LatestLY on Feb 27, 2022 11:48 PM IST. For more news and updates on politics, world, sports, entertainment and lifestyle, log on to our website latestly.com).