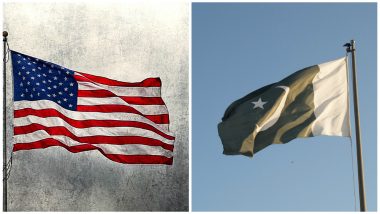 Islamabad, September 23: William Todd, the nominated United States Ambassador to Pakistan, has conveyed the Trump administration's expectations stating that "Pakistan must take sustained and irreversible action against terrorism." Addressing his Senate confirmation hearing, Todd said that the US' relations with India should not come at the expense of Pakistan, adding that the US would be willing to "facilitate dialogue between the two countries to bring down tensions in the region."

"Our hope is that both countries will take the necessary steps to reduce tensions, and as President Trump has offered, we are prepared to facilitate dialogue if both sides request it," he said. However, Todd said that if Islamabad wants to reduce regional tensions and rebuild a strong relationship with the US, it needs to act against terrorism on its soil. Pakistan, US Review Bilateral Relationship During Virtual Conference for Peace and Stability in Afghanistan and South Asia.

"Pakistan has taken important steps towards fulfilling that commitment but needs to continue that work," he said. Todd also spoke about nuclear security and Pakistan's sensitive situation, vowing to work with Pakistan to "advance shared interests in eliminating terrorism from its territory and advancing security in the region."

"Strategic stability and non-proliferation, carrying a clear message on the threat that nuclear weapons pose to the United States, the region, and our allies and partners. Pakistan needs to demonstrate it is prepared to live up to international commitments on weapons of mass destruction," he said.

Todd called on Islamabad to put extreme pressure on militant groups, including Lashkar-e-Taiba (LeT) and its affiliate groups, a demand New Delhi has been making since long. Todd said that peace in Afghanistan is in the US' and Pakistan's best interests.

"Pakistan is an essential regional partner, and this is an opportune moment in our relationship to work together on shared goals. Peace in Afghanistan is in both our countries' best interests and effective US-Pakistani cooperation is essential to achieve that objective."

"Pakistan played a critical role in creating the conditions that brought Afghan leaders and the Taliban to the historic start of Afghan peace negotiations. Pakistan has an even more important role to play in supporting efforts towards a negotiated political settlement that ends 40 years of war," he added.

Todd's statements hold great importance as it seconds India's pressing demands on Pakistan and endorses the fact that the US and India are on the same page in their demands to the Imran Khan government.

(The above story first appeared on LatestLY on Sep 24, 2020 03:16 AM IST. For more news and updates on politics, world, sports, entertainment and lifestyle, log on to our website latestly.com).