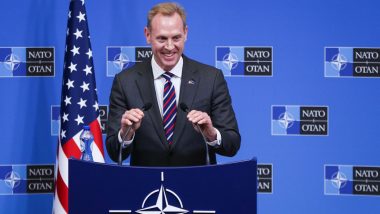 Washington, April 19: US Acting Defence Secretary Patrick Shanahan has confirmed that North Korea conducted a weapons test, but said that it was "not a ballistic missile". "I'm not going to go into the detailed intelligence, but the way I'd characterise is it is not a ballistic missile," Shanahan told the media here on Thursday. Pressed on whether North Korea fired something into the air or conducted a ground test, Shanahan said: "You could use shoot, launch, test - they're very synonymous terms," The Hill magazine reported. North Korea Blames US Secretary of State Mike Pompeo for Failure of Hanoi Summit.

He did not directly answer a question on whether the weapon was a new capability. "I'm not being cagey here, it's just what's important is it wasn't ballistic," he said. Shanahan added that there has been "no change to our posture or to our operations" after the test.

KCNA did not specify what type of weapon was tested, but experts noted the use of the word "tactical" appeared to imply something short-range. As such, the test did not appear to violate North Korea's self-imposed moratorium on missile and nuclear tests. North Korean Leader Kim Jong-un Ready for Third US-North Korea Summit.

Wednesday's test was being interpreted as a sign of increasing impatience by North Korea as talks with President Donald Trump stall. Shanahan said on Thursday that he did not want to "rush" to judgment on the message being sent by North Korea ahead of fully analysing intelligence. But the fact that the weapon was not a ballistic missile is "a statement in and of itself".

A February summit between Trump and Kim ended with an impasse over sanctions relief, and there have been no signs of closing the gap between Washington and Pyongyang since. Last week, Kim said he would be open to a third summit with Trump, but gave the US until the end of the year to be more flexible in negotiations. Trump responded by touting his "excellent" personal relationship with Kim.

(The above story first appeared on LatestLY on Apr 19, 2019 12:28 PM IST. For more news and updates on politics, world, sports, entertainment and lifestyle, log on to our website latestly.com).