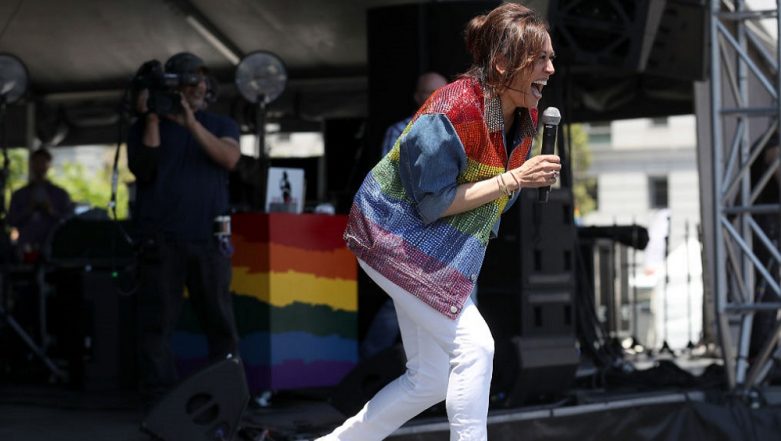 San Francisco, July 1: US Senator and presidential hopeful Kamala Harris joined the large crowd and danced at the San Francisco's Pride parade. The senator from California, who has regularly participated in pride parades ever since she was district attorney, wore shiny rainbow-coloured sequined jacket.

She completed her look with white jeans and comfortable matching sneakers."Such an honor to be back home in San Francisco to celebrate #Pride. Remember, we will leave no one to fight alone," the Indian-origin Senator tweeted along with a video. Kamala Harris Enters 2020 US Presidential Race With a Quote From Martin Luther King Jr.

Such an honor to be back home in San Francisco to celebrate #Pride. Remember, we will leave no one to fight alone. pic.twitter.com/vXyEXmMC2E

In a 10-second-video, exuberant Harris is seen waving at the crowd from the stage with loud music in the background. In another clip, Harris reached straight into the charged-up crowd and danced with a wide grin on her face.

World Pride is an event, which organised to celebrate and promote lesbian, gay, bisexual and transgender (LGBT pride) issues on international platforms through parades, festivals and other cultural activities.

On January 21, Harris announced that she will be competing for the US presidential elections in 2020. The Democrat Senator is the first African-American woman to announce a run for the White House in 2020.