The landscape of learning to play western musical instruments is very competitive. This is the playing field for Kuke Music. Furthermore, Classical Musical events will return once the pandemic eases following mass vaccination and this will be a positive development for Kuke Music as well. 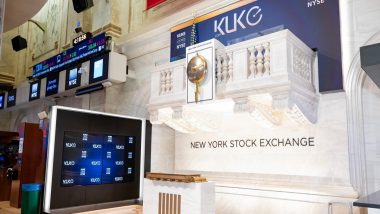 If you are interested in making a play in China’s Classical Music industry, then Kuke Music (NYSE: KUKE) is the right play. To further add on, the company provides exposure to the growing smart music education and music subscription and licensing segment as well.

The company raised $50 million through the sale of American Depository Shares (ADS) in early January 2021. The ADS represented Class A stock through its initial public offering (IPO). Previously, Kuke has been able to obtain around $87 million from investors like China Cultural and Entertainment Fund, Lebon Holding, and Musence Limited.

The Beijing-based company is primarily involved in the licensing, streaming, and educational services of Western classical music in the ever-growing Chinese market.  Some of its major customers include Tencent Music Entertainment (TME) Group, NetEase Cloud Music, and institutional subscribers like top tier universities, conservatories, and public libraries. Kuke Music also happens to have a long-term partnership with Naxos Music Group, which has aided the company in constructing over million traditional classical music tracks and jazz tracks for its digital library.

The company claims to have the largest database of classical music in China comprising of 1.8 million songs produced by 900 studios and 42,000 musicians. The company also has a strategic partnership with leading Chinese universities like Tsinghua University and Peking University.

The management team of Kuke music is led by CEO Mr. He Yu, who also happens to be the founder of Kuke Music as the grandchildren of Mr. Shande Ding, one of the most well-known Chinese composers and music educators, Mr. He Yu and Mr. Lung Yu grew up in a family of musicians and share the same passion for classical music.This reflects that the company is led by someone who has hands-on knowledge of the Classical Music scene in China. This may be essential for the company’s outlook as such eccentric leaders can take the company great leaps forward. The organization founded in 2003 is also involved in providing services related to the education of music to students and is also involved in the production of live classical music events for numerous artists and orchestras.

In this article, we will be looking at the various aspect of the Chinese Classical Music industry along with the revenue potential for Kuke Music given the industry growth. We will also be looking at smart music education segment of the business as well. Additionally, we will also dive into the reasons why the company is incurring a significant capital expenditure (CAPEX) outlay to plan for the future. 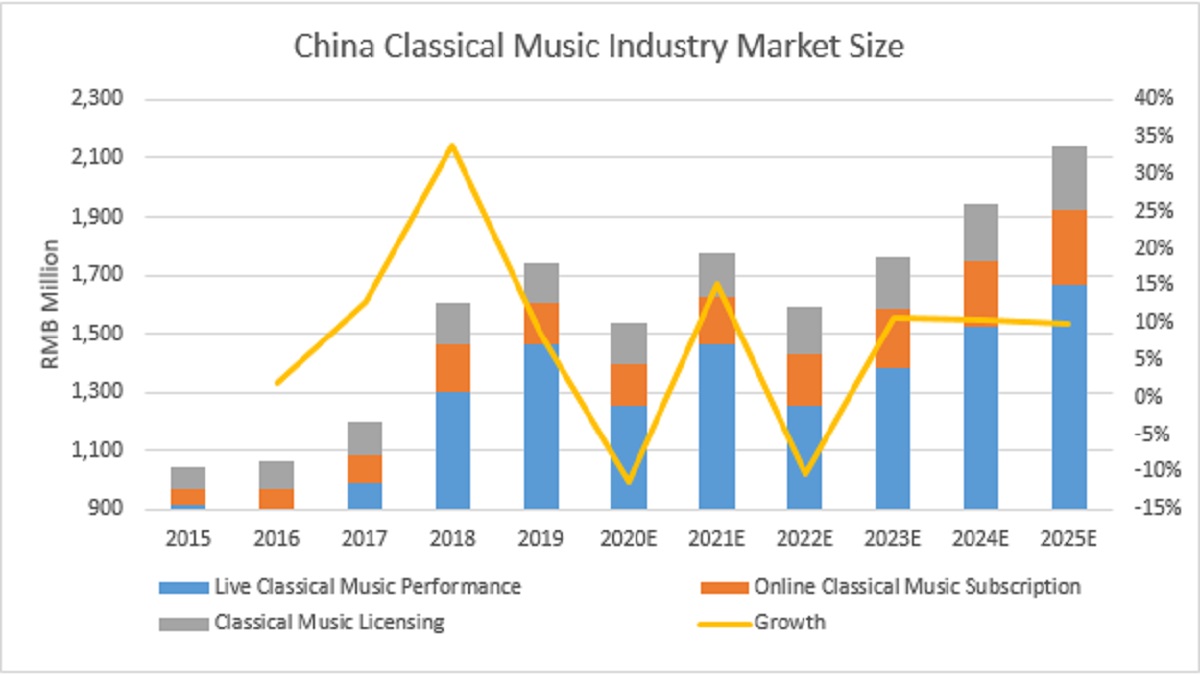 Diversification is a key component for Kuke Music as it is also involved in smart music education and its related education services. The Student Piano Education Market is a fast-growing market with double-digit growth annually. A piano is the first instrument used for music education and numerous parents think that piano teaching is the best way to get their child to develop an interest in music.

In the Smart Piano market, Kuke is focusing on the kindergarten segment. The company has 10,200 students enrolled from 1,300 kindergartens across 161 cities in China.  However, that is only 27% of the Chinese Student Piano market and provides an opportunity for Kuke Music to capture the remaining 73% of the market. 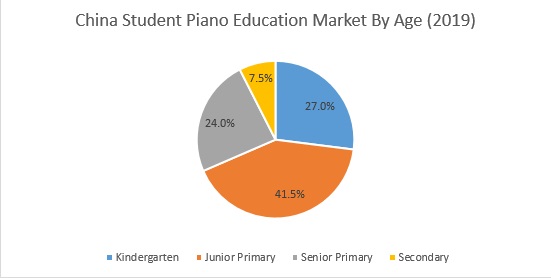 Furthermore, going forward, the kindergarten market is also expected to contract by 2025, and Kuke Music has the groundwork to expand and explore in the remaining age groups and become a major player in the K-12 group. China is home to 200 million elementary and high school students. 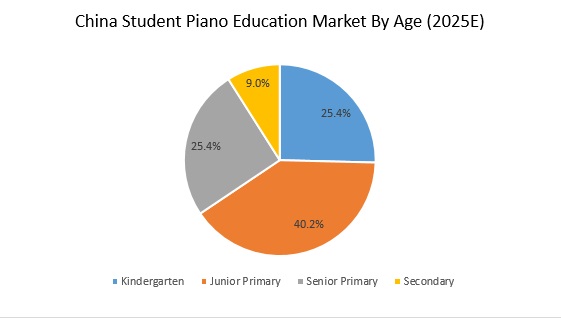 On April 15,2021, Kuke Music Holding Limited ("Kuke" or the "Company") (NYSE: KUKE), today announced its unaudited financial results for the fourth quarter and full year ended December 31, 2020. Revenue in the fourth quarter increased by 21.7% to 128.0 million from 105.2 million. This increase was mainly driven by the increase in revenue from live classical music events and our smart music education business, which resulted from the regular school season as well as our kindergarten subscription growth. Gross profit in the fourth quarter of 2020 was RMB102.0 million (US$15.6 million), compared to RMB86.1 million in the same period of 2019. For the whole year performance, Kuke Music Holding Limited Total revenue in the full year of 2020 increased by 11.5% to RMB162.9 million (US$25.0 million) from RMB146.1 million in the full year of 2019. 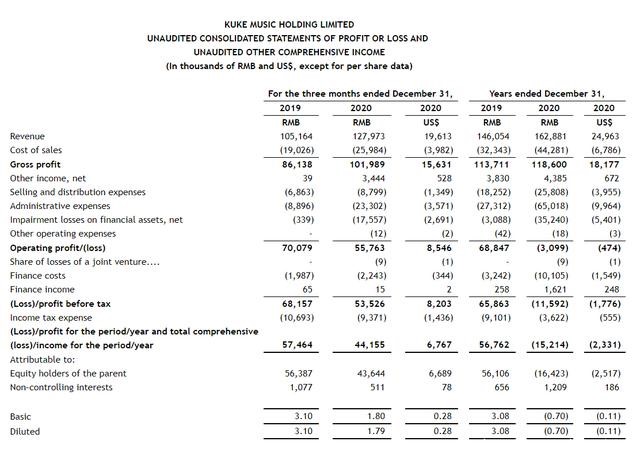 Kuke Music offloaded 5 million ADSs on the New York Exchange in early January of 2021 at $10 each and raised $50 million. Each ADS represents one Class A ordinary share. AMTD Global Markets, Deutsche Bank, and US Tiger Securities were the lead underwriters on the IPO. Some of the pre-existing shareholders had shown the desire to buy $25 million worth of stock, which could be seen as a bullish signal. The holder of Class A stock will be given one vote per share.

The company intended to use 70% of the proceeds to diversify and enhance its smart music education offering product. In addition to this, the company will deploy funds from the IPO to spread the geographic reach of its smart music services and increase its technological capabilities. Meanwhile, 15% of the IPO proceeds have been diverted to improve the content on the platform, push the company's leadership position in terms of content and discover more content monetization schemes. Nearly 10% of funds by IPO have been allocated for opportunities related to potential acquisitions and strategic investments. Lastly, 5% of the funds generated by the IPO would be used for fulfilling the working capital requirement and other general corporate purposes.

We would recommend keeping a lookout for this company as it is involved in the booming education industry, which will observe a resurgence once the pandemic slows down. The outdoor events will return, education will go back to normal and this can be a potential catalyst for the share price of Kuke Music to climb back up.

Western Classical music is very much alive in China. The market for Western classical music in China is expected to grow going forward and Kuke Music is in the right position and the right play to benefit from this growth from every aspect. Millions of children play Western instruments. It is the basis on which the education of music relies upon. According to estimates, between 30 million and 100 million children are learning how to play the piano in China. This is a huge number and provides Kuke Music an opportunity to spread its presence in this key demographic. Piano lessons start early at an age of four years old. The landscape of learning to play western musical instruments is very competitive. This is the playing field for Kuke Music. Furthermore, Classical Musical events will return once the pandemic eases following mass vaccination and this will be a positive development for Kuke Music as well.