In its latest South Asia Economic Focus released ahead of the annual meeting of the International Monetary Fund and the World Bank, the Bank, however, noted that India is recovering stronger than the rest of the world. The Indian economy grew by 8.7 per cent in the previous year. 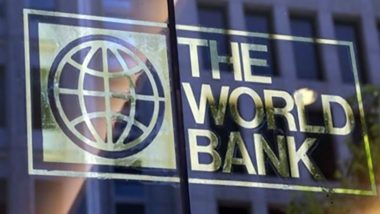 Washington, October 6: The World Bank on Thursday projected a growth rate of 6.5 per cent for the Indian economy for the fiscal year 2022-23, a drop of one per cent from its previous June 2022 projections, citing deteriorating international environment.

In its latest South Asia Economic Focus released ahead of the annual meeting of the International Monetary Fund and the World Bank, the Bank, however, noted that India is recovering stronger than the rest of the world. The Indian economy grew by 8.7 per cent in the previous year.

"The Indian economy has done well compared to the other countries in South Asia, with relatively strong growth performance... bounced back from the sharp contraction during the first phase of COVID," Hans Timmer, World Bank Chief Economist for South Asia, told PTI in an interview. World Bank Slashes Economic Outlook for China to 2.8 PC.

India, he said, has done relatively well with the advantage that it doesn't have a large external debt, there are no problems coming from that side, and that there is prudent monetary policy, he observed. The Indian economy has done especially well in the services sector and especially service exports.

"But we have downgraded the forecast for the fiscal year that just started and that is largely because the international environment is deteriorating for India and for all countries. We see kind of an inflection point in the middle of this year, and first signs of slowing across the world," he said.

The second half of the calendar year is weak in many countries and will be relatively weak also in India, he said. Timmer said that's mainly because of two factors. One is the slowing of growth in the real economy of high-income countries. Indian Economy Growing at Fast Pace, Demat Accounts Surpasses 100 Million.

The other one is the global tightening of monetary policy that tightens financial markets and not just that it leads to capital outflows in many developing countries, but it also increases interest rates and uncertainty in developing countries which has a negative impact on investment.

"So, it (India) has done relatively well. It is not as vulnerable as some of the other countries. But it's still in tough weather. It (India) has to navigate the higher commodity prices and there are more headwinds at the moment," he said in response to a question.

India is doing better than the rest of the world, he said, adding that there are more buffers in India, especially large reserves at the central bank. That's very helpful. "Then the government has very actively reacted to the COVID crisis," he said.

The Indian government has set an example for the rest of the world, like expanding social safety nets, using digital ideas. "I think it's almost up to a million people that they are reaching at the moment. It's a good response also," he said. At the same time, he said that he does not agree with all the policies of the Indian government.

"Especially their reaction to the high commodity prices might seem logical in the short run, but might backfire in the long run. For example, the export ban on wheat and the export ban or the very high tariffs on rice exports," he said.

"So not all policies are optimal, but a strong reaction to the crisis in terms of relief efforts, strong monetary policies, and in general a trend towards a more business friendly environment," Timmer said. Responding to a question, he said since India needs to address some of the key concerning issues.

Timmer pointed out that only 20 per cent of the women are participating in the labor market. "That is a problem that has to be addressed. You don't solve that just by extending your social security system. That's important. Ultimately, the people should be given the tools to generate income themselves," he said.

"What we have seen in the region and to some extent in India also is that the government was not really prepared to absorb all those shocks that we are seeing in the region. The COVID shock, the war in Ukraine and the commodity prices are once in a lifetime shocks and they come one after the other and then the environmental disasters also," he said.

Both the government and the people are not prepared to cope with that. And that is because just too few people are fully participating in the economy, he argued, adding that that's a high priority for India to make progress there. "In India, the focus is on the existing big firms. Focus is on FDI. And that's all very good. The focus is on social safety nets. That's also very good. But it's not enough. You need to integrate more people in the economy," Timmer said.