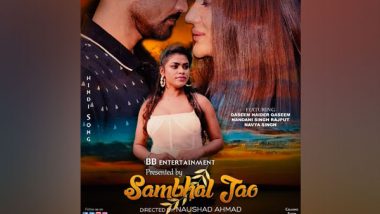 He will also be seen in the music video alongside beautiful divas Navya Singh and Nandani Singh Rajput.

The video will showcase the story of man who comes across his ex-girlfriend while on a holiday with his wife. While Nandini plays a hot girlfriend and the protagonist's former love, Navya looks gorgeous in a traditional avatar of a married woman. Naushad Ahmed has directed the twisted love story at a picturesque location of Goa. The team has been waiting for the song's release for months now. But the release was pushed by BB Entertainment due to COVID-19 pandemic.

Qaseem Haider Qaseem is quite excited about the song's release. He said, "The song is very close to my heart as I don't only star in the video but have also written the lyrics. I hope the audience will like the depth of the song."

Fans are also excited about Navya Singh's role in the video. Navya is a transgender woman who is carving her own path on Bollywood. She said, "I am grateful to Qaseem Haider Qaseem and the entire team for giving me the opportunity and trusting me. I am also very happy with the response on the teaser and I hope people will love me and the song that we have made with lots of passion."

Sambhal Jao has been produced by NK Mossvi, composed by Prashant Singh and sung by Zakir Sadani.