Indian Economic Trade Organization (IETO) was invited to the Saint Petersburg International Economic Forum (SPIEF) 2021 on behalf of the President of Russia, Vladimir Putin, which was held in Saint Petersburg from 2nd-5th June 2021. 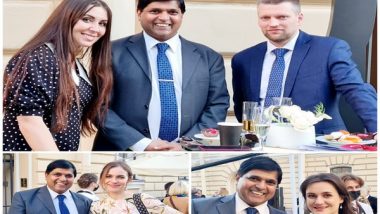 The President of the IETO participated in the Forum and many other meetings were held on the sidelines of the event, including some in the region of Karelia, Northern Russia, and the Saint Petersburg Chamber of Commerce and Industry.

Madame Ekaterina presented the opportunities available in the federal capital of Saint Petersburg and the various incentives that might be considered by the Government that is encouraging foreign investors to come and invest in Russia.

Indian and Russia have been great partners since 1960 and the liaisons have strengthened majorly in defense cooperation. Russia is likely to deliver the S-400 Missiles to India by April 2023, as per the contract signed in October 2018 at an estimated cost of INR 40,000 crore.

Also, Dr Asif Iqbal had a meeting with the Consul General of India, Deepak Miglani in Saint Petersburg. As per the Consul General and the IFS, Saint Petersburg is a great location and a prospective business destination for Indian companies. He also explained how Russia is looking at increasing health partnerships with India by exporting 3 million doses of vaccines very soon.

IETO later held meetings with the Bahrain Foreign Ministry and the Qatar delegation, which were nominated as the guest country at SPEIF2021.

This story is provided by SRV Media. ANI will not be responsible in any way for the content of this article. (ANI/SRV Media)