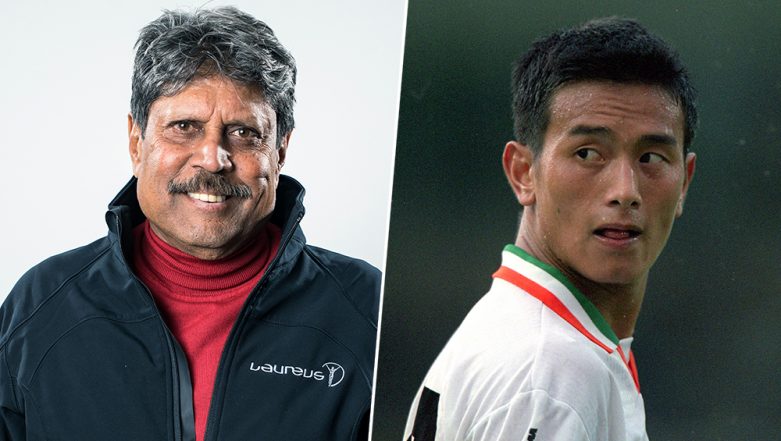 Kolkata, July 17: India's first World Cup-winning cricket captain Kapil Dev will be conferred East Bengal's highest honour, Bharat Gaurav, during its Foundation Day on August 1. The red-and-gold also plans to host a ceremonial farewell for the iconic Bhaichung Bhutia in the run up to the club's centenary celebrations next year. The former India captain will once again be seen in action, eight years after he last donned the blue jersey in the AFC Asian Cup in Qatar. Team India's Head Coach Selection: Kapil Dev, Anshuman Gaekwad and Shantha Rangaswamy Are Favourites to Pick Men's Team New Coach.

One of the country's greatest all-rounders, Kapil had signed for East Bengal on June 22, 1992, and played for 27 minutes six days later, as a substitute striker in an exhibition match versus Mohun Bagan. Announcing this series of programmes, EB executive committee member Debabrata Sarkar said Bhutia would also formally stop wearing the red-and-gold jersey, but the match will be decided by coach Alejandro Menendez.

"I came here from Sikkim as a 17-year-old and I cried when I left behind my family. But I got a bigger family here and never became home sick. Other than Mohun Bagan, no other club has made so much contribution to Indian football," the 'Sikkimese Sniper' said thanking the club.

Bhutia picked EB's Federation Cup semi-final win over Mohun Bagan in 1997, in which he scored a hat-trick, and the overwhelming reception after winning the ASEAN Cup in Indonesia in 2003, as his two "unforgettable moments" of his career at East Bengal. BCCI Invites Fresh Applications for Indian Cricket Team Head Coach & Support Staff, Ravi Shastri Given Option to Reapply.

Bhutia would also be honoured with "identifying and nurturing the icon' award, while former India captains, Manoranjan Bhttacharya and Bhaskar Ganguly, will be given Lifetime Achievement awards. The club will also honour legendary P K Banerjee with the 'Coach of coaches' award, while Laldanmawia Ralte will get 'Best Footballer of the Year' award on August 1.