Kaluuya, who won the first honour of the scaled down virtual ceremony which is being held bi-coastally from New York and California in the wake of the coronavirus pandemic, faced a technical problem as he started his acceptance speech. 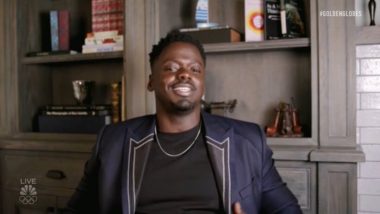 The British actor earned the trophy in the best performance by an actor in a supporting role in any motion picture category for the film, helmed by Shaka King in his studio feature directorial debut.

Kaluuya, who won the first honour of the scaled down virtual ceremony which is being held bi-coastally from New York and California in the wake of the coronavirus pandemic, faced a technical problem as he started his acceptance speech.

"Big Little Lies" star Laura Dern, who was presenting the award to Kaluuya, apologised for the "bad connection" on stage as the feed cut away.

"We apologise for that technical problem and send all of our congratulations to Daniel and his Golden Globe win," she said.

Daniel Kaluuya wins the award for Best Performance by an Actor in a Supporting Role in Any Motion Picture at the #GoldenGlobes! pic.twitter.com/hrZDCk3uwR

As it has happened over many a Zoom calls this past year, it turns out Kaluuya's feed was muted, but quickly rectified, a source told Variety. When Kaluuya came back into view, he asked "Is this on? Can you hear me now?"

Once the audio issue was resolved, the actor thanked his family and the Hollywood Foriegn Press Association (HFPA), the body that conducts the Golden Globes currently facing fire over its lack of Black representation among its ranks. Kaluuya further said he gave "everything" to play Hampton in the 1960s-set period who was murdered at the hands of the FBI.

"He taught me about myself, made me grow as a man and I appreciate it with all my heart. And I hope people -- there's a lot of information about how he died, but I hope you people out there will grow and learn about how incredibly he lived. Thank you so much for this honour," he said.

"Judas and the Black Messiah" is a Chicago-set film which follows petty criminal William O'Neal (played by LaKeith Stanfield) who agrees to work as an informant for the FBI in order to infiltrate the Black Panther Party and take down the chairman of its Illinois chapter Fred Hampton (Kaluuya).

Kaluuya bested Sachan Baron Cohen, who was one of the frontrunners in the category for his turn as social activist Abbie Hoffman in the legal drama "The Trial of the Chicago 7". Later, director-writer Aaron Sorkin won the best screenplay for a motion picture for the "Chicago 7".