Taylor Swift recently revealed the thought process which goes behind the lyrics formation of her songs. She recently also revealed her album Midnights and the name of track 13 of the album called Mastermind. The album will be out on October 21. 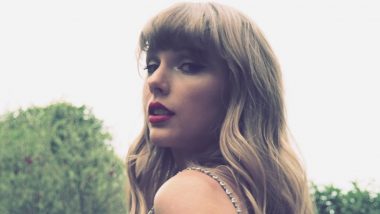 "It's dorky," she said. "But I also have, in my mind, secretly, established genre categories for lyrics I write. Three of them, to be exact: They are affectionately titled Quill Lyrics, Fountain Pen Lyrics and Glitter Gel Pen Lyrics.... I came up with these categories based on what writing tool I imagine having in my hand when I scribbled it down - figuratively. I don't actually have a quill. Anymore. I broke it once when I was mad," Billboard reported.

A glitter gel pen is used for lyrics that "are the drunk girl at the party who tells you that you look like an Angel in the bathroom." Swift's hit song "Shake It Off" was used as an example for this category. The fountain pen is used when the pop star is "trying to paint a vivid picture of a situation, down to the chipped paint on the door frame and the incense dust on the vinyl shelf" and "All Too Well" was given as the example.

Swift continued her speech by elaborating on the reasons she came up with the lyric classifications. "Why did I make these categories, you ask? Because I love doing this thing we are fortunate enough to call a job," she said. "Writing songs is my life's work and my hobby and my never-ending thrill. I am moved beyond words that you, my peers, decided to honor me in this way for work I'd still be doing if I had never been recognized for it." Midnights Announced by Taylor Swift; Star's Highly Anticipated Tenth Album Releases on October 21.

According to Fox News, Swift shocked her fans when she revealed the name of a song off her new album, Midnights. The singer of "Look What You Made Me Do" launched a new TikTok series where she intends to gradually unveil the track list for the new album, Midnights Mayhem with Me. On September 21, Swift revealed the name of track 13: "Mastermind". The album will be made available on October 21.