With the orders of the unlock issued by the state government of Maharashtra, the Film and TV industry has been allowed to commence shooting with the time limit of 5 pm in a bio bubble, though no outdoor shoot is allowed. 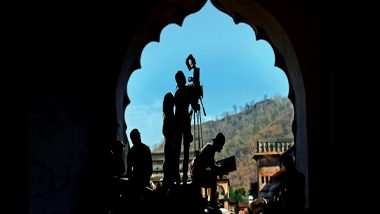 With the orders of the unlock issued by the state government of Maharashtra, the Film and TV industry has been allowed to commence shooting with the time limit of 5 pm in a bio bubble, though no outdoor shoot is allowed. The industry has reacted positively to the decision but has also said it will take time for the complete resumption. Speaking to ANI, FWICE Chief BN Tiwari stated, "We went through a tough time due to the rise in covid cases in the city, hence we immediately moved to different states including Gujarat, MP, Bihar, Jharkhand, UP so that the show would continue and due to fewer restrictions as compared to Mumbai." Maharashtra CM Uddhav Thackeray Hints at Giving Nod For Film, TV Shoots in Mumbai if Daily COVID-19 Case Count Under Control.

He further stated that he has requested the Maharashtra CM to extend the shooting time, "It's most favourable for us to work here in Mumbai, as we have a base here. But as the Maharashtra government-imposed restrictions in the state, we had no option but to move. Now we will need at least a week time is required restart the film sets and studios as many of them need to be sanitised and refinished. We have also written to Maharashtra CM Uddhav Thackeray to extend the shooting time till 7 pm as the bubble till 5 pm isn't enough." Jaaved Jaaferi: Family Entertainer Films Get Better Mileage on TV.

The Film and Television industry has started a vaccination drive and is making sure all unit members who begin shooting are vaccinated with the first dose.

Speaking about it, Tiwari added, "There are more than 500 film sets in Mumbai where around 5 lakh members of the federation are working. Looking into the current scenario we have now started a Vaccination program for all our workers including, labours, technicians, actors, directors, artists. We will be getting everyone vaccinated before the shoot resumes to avoid risk."

Tiwari concluded by talking about the difficulties faced while shooting in Mumbai and said, "Mumbai is the base of the industry but it's getting difficult to shoot here these days, hence the industry has started moving to other states these days." "We face a lot of problems here in Mumbai because there is no single window for shooting. We have moved to UP, MP, and other states as it is cheap as well as we get single-window permission for the shooting of movies," he said.