Heidi Klum broke the internet when she appeared in public dressed as a worm for Halloween. But more importantly, something that many were curious about, was how she managed to move around in it or used the restroom! Continue reading to find out. 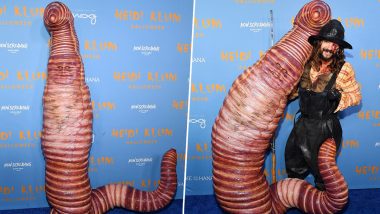 Heidi Klum and Tom Kaulitz as a worm and fisherman (Photo Credit: Instagram)

Heidi Klum broke the internet when she came out wearing a Halloween costume that looked like a worm. And it had many people wondering how she pulled it off or more importantly, how she used the loo! And, Heidi Klum knew it wouldn't be simple to get out of her gigantic worm costume when she had to use the restroom. Heidi spoke to Page Six on the red carpet of the Halloween party she was attending where she said, "That's going to be tricky!" Heidi Klum Posts a Hot NSFW BTS Pic Before She Turned a 'Worm' for Halloween 2022.

When Page Six further asked her how she planned on using the loo with this costume, she said, "A lot of it has to come off... When I gotta go, I'll have to de-strap and make it happen somehow." Heidi told Page Six that she needed assistance moving about since the outfit, which took more than 10 hours to finish, left her feeling "claustrophobic."

According to Page Six, she told reporters present there, "It's hard for me to move. I don't really have arms or legs." She added, "When I fall over I need someone to help me get back up. I'm kind of stuck in it, you know? It feels a little claustrophobic." Heidi later abandoned her slimy costume to reveal a dazzling mesh outfit that didn't leave much to the imagination. Heidi Klum Held Her 21st Halloween Costume Party and Slithered in as a Worm.

She came for the party along with her husband Tom Kaulitz, who was dressed as a fisherman. Heidi Klum's model daughter Leni, Elon Musk and his mother Maye, Ice-T and Coco, Kim Petras, and Heather Graham were among the other attendees at the spooky Halloween party.