Washington D. The famous boy band Jonas Brothers have every reason to rejoice. The band which had a successful 'Happiness Begins' tour, discussed their inspiring journey in the music business and also gave advice to young aspiring singers. 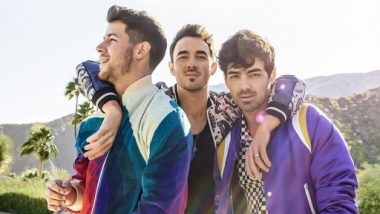 Washington D.C [USA], Oct 9: The famous boy band Jonas Brothers have every reason to rejoice. The band which had a successful 'Happiness Begins' tour, discussed their inspiring journey in the music business and also gave advice to young aspiring singers. After giving a power-packed performance at a housefull show, Nick, Kevin, and Joe Jonas headed to the Grammy Museum for a special event, according to website E-News. Before celebrating their certified platinum album 'Happiness Begins' and performing for a few lucky fans, the brothers sat down with E! News exclusively to discuss their journey."We just got out there and played and I think it's something that we try to tell a lot of young artists when they ask us for advice. Just get out there and play and rehearse," Joe shared with Justin Sylvester when discussing their early days in the industry. Jonas Brothers’ ‘Happiness Begins’ Album Cover Has Called for a Meme Fest on Twitter; Check Out Some of the Funniest Ones.

"For us, it started organically with Nick. He was doing a solo record. Somebody heard us and thought we'd be good as a band so it kind of started really fast but it took a long time to crack the code," he said. Whether it's the track from their 2008 album 'A Little Bit Longer' or more recent hits like 'Sucker' and 'Cool,' the Jonas Brothers continue to successfully delight fans of all ages. The musicians had some words of wisdom when it comes to thriving in the music industry at a young age."I would say in addition to the love of music, I think you also have to be conscious of just how scary it can be to have a young person in this business in general because when it's purely just about the music and the love of music, that's one thing," Nick shared."But when you add all the other elements, it can go south very quickly so I think I would encourage my kids and our kids to follow their passion but know that we're going to do our best to be good parents within that and sometimes, it means setting some boundaries," he added. Priyanka Chopra Attends Her First Jonas Brothers Concert in Atlanta, Actress Cheers the Terrific Trio – Nick, Kevin and Joe! See Pics, Videos.

As the Happiness Begins tour continues across the country, Nick, Joe, and Kevin are more excited than ever before to perform for fans.