Adani Agri Fresh procured close to 2,500 tonnes of apple from farmers within the first three days of the procurement season for this year. The company witnessed an overwhelming response from the farmers since, as the Adani Agri Fresh offered prices higher than the mandis. 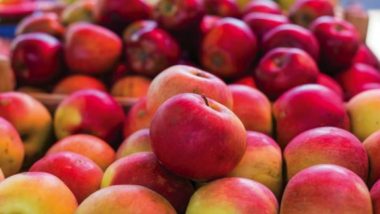 New Delhi, August 30: Adani Agri Fresh procured close to 2,500 tonnes of apple from farmers within the first three days of the procurement season for this year. The company witnessed an overwhelming response from the farmers since, as the Adani Agri Fresh offered prices higher than the mandis.

Adani Agri Fresh procures apple through with 'controlled atmosphere facilities' in Shimla district and promotes it under the brand name 'Farm-Pik'. The apple procurement season started last week and will go on till the end of October. Also Read | Mathura: Man Arrested for Threatening Muslim Dosa Seller and Vandalising His Cart for Naming Business After Hindu Deity.

Adani Agri Fresh official at Himachal Pradesh said that on the very first day of the procurement season, they received about 1,000 tonnes of apples as against about 300 tonnes in past years. Also Read | Uttarakhand Rains: Four Killed as Three Houses Collapse in Dharchula After Heavy Rainfall.

"Adani Agri Fresh procures apple per kilogram while they have to sell it per box in the mandis. Farmers are happy to get returns for every gram of apple instead of the size of the box," the official said requesting anonymity.

Adani Agri Fresh came under attack from a section of politicians after some media reported that Adani Agri Fresh has revised apple procurement prices downward this season.

The company official claimed that the mandis are compelled to increase their apple procurement prices since the company is offering better deals to the farmers. "Adani Agri Fresh has determined the procurement price in the line with the market and interests of farmers," he added.

Refuting the reports by a section of media and criticism by politicians on Adani Agri Fresh's procurement prices for the season, the official quoted above said, "There are hundreds of traders, commission agents and other middlemen in apple trade and it is farmers' choice whom they wish to sell theirs produces.

However, they have continued to supply to Adani Agri Fresh that offers prices higher than the mandis where apple prices have gone down. Besides paying per kilogram, we also offer authentic sorting and grading for price determination, which benefits the farmers immensely."

He added that Adani Agri Fresh introduced better farm practices and international standards in the packaging and logistics of apples in the interests of both farmers and end-users.

Adani Agri Fresh entered the apple trade in Himachal Pradesh about 15 years back and it deals with over 17,000 farmers from Shimla, Kinnaur and Kullu valleys spread across 700 villages.

The company offers pre and post-harvest advisory to the farmer through its field team and to boost production with enhanced quality. Unlike the traditional value chain in apple trading, farmers don't have to depend on the middlemen and unreliable staggered cash transactions to sell their apples as the company procures them directly and makes immediate payments through online transfer.