A prolonged water crisis in Ajmer's rural areas has pushed people into a distressful situation amid peak summer months. 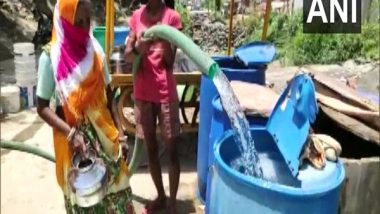 People residing in rural areas have been facing a water shortage for the past 10-12 years and has become a routine feature in these areas. Meanwhile, the administration has been unable to resolve the issue and still claims that steps are being taken to solve the water shortage.

Many have resorted to putting locks on their water containers in an effort to protect it against contamination and water theft in the area.

Residents of Chhatri Yojna Vaishali Nagar, Ajmer told ANI that the administration sends water tankers in the area after 2-4 days. Tap water is available after every alternate day. There are few villages including Rupan Garh where water is supplied every 72 hours.

Speaking to ANI, a local woman who has lived in the area throughout her life said, "We are facing this issue for the past 12 years. Water tanker comes here after every two days. We store water and put a lock on it so that it does not get polluted by stray animals or stolen by people."

According to her, water tankers come after every four days, while water on the tap comes after a gap of a day.

"There is a severe water crisis. It has been like this for the past 10-12 years. Earlier, there was no such problem. The water tankers come here after every four days and tap water is accessible with a gap of one day. The water tanker should come more frequently as the water we store is not sufficient for all the households here," Parvati told ANI.

"We are bound to lock our water tankers in such a situation. It has to be protected from getting stolen or polluted," she added.

This is the opinion echoed by many of the residents in the rural areas.

Meanwhile, CL Jatav, Superintending Engineer of the Public Health Engineering Department told ANI that there is a delay in providing water to some areas due to issues in the water pipeline and electricity supply. "However, the demand is met by sending water tankers," he said.

"Water is supplied every 48-72 hours in Ajmer's rural areas. There are few villages including Rupan Garh where water is supplied every 72 hours. Sometimes water supply is delayed due to issues in pipeline and electricity supply. We are working towards cutting down any delays and providing water every 48 hours. When the interval of water supply is increased due to any reason, we send water tankers to fulfill people's water requirements," he said. (ANI)