Andhra Pradesh BJP president Somu Veerraju slammed the state government for not providing any aid to the farmers. 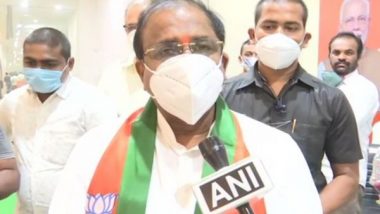 "The state government is not giving minimum support price (MSP) to farmers for their crops but making false claims. Ruling party i.e. YSRCP is indulging in corruption in the name of a housing scheme. State BJP will hold agitation against the state government's anti-farmer policies", the BJP president said.

"In Visakhapatnam, ruling party is demolishing constructions in the guise of encroachments. Opposition parties are alleging that demolitions are being made out of political vendetta. As BJP, we opine that enquiry should be ordered with a high court judge. If the encroachments are proved, then the government can demolish them. But it is not correct to demolish constructions at the whims and fancies of the state government", he said.

The BJP President said, "It is not true that the state government is imposing this burden as guided by the Centre. BJP will hold agitation against increase of property tax ." (ANI)