In a 1.19-minute video presentation in Hindi on his official Twitter handle on Thursday, posted with the hashtag 'CongressForAdivasis', the former Congress national president said, "BJP calls you 'vanvasis' (forest dwellers). 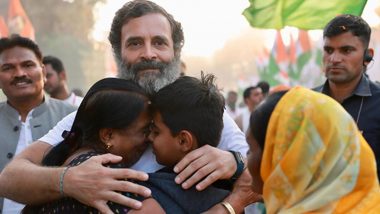 Khandwa, November 24: Congress MP Rahul Gandhi on Thursday said Adivasis are the original owners of the country's resources while accusing the BJP of calling them 'Vanvasis' and snatching their rights.

The Congress says Adivasis are the rightful owners of the country's resources. The differences between them and us is not just in the names we call the Adivasis by but also in our mentalities. We are for the empowerment of Adivasis while they are for torture."

In his short video address, Rahul further accused the BJP government at the Centre of working against tribal interests whie claming that the Congress did everything to safeguard the rights of Adivasis since independence. Later, addressing tribals at an 'Adivasi Sabha' in Madhya Pradesh, on the sidelines of his ongoing 'Bharat Jodo Yatra', the former Congress president said, "What does the word 'Adivasi' mean? It means that they are original stakeholders in India and the holders of the country's resources. But BJP calls you Vanvasis. They snatch your rights away from you, saying your land was never yours and will never be yours. They also say that you belong in the forest." Rahul Gandhi Says ‘Only Congress Can Protect Constitution Which Is Under Constant Attack From BJP’.

He added, "We believe that you are the original stakeholders in the country. The entire country was yours and was taken away from you. You need to be given back what is rightfully yours. You will be given your's rights, education, health and a portion of the country's revenue." His foot-march in MP stared from Borgaon on Thursday and reached Chegaon Makhan in Khandwa.

In the video, Rahul further said, "Who wrote our Constitution? Baba Saheb Ambedkar Ji wrote it and the Congress collaborated in the effort. At the time, BJP leaders had said there was no need for a Constitution."

"Who provided you the rights to our forest resources? It was the Congress. Who formulated Forests Rights Act and PESA [Panchayats (Extension to Scheduled Areas) Act]? We did. Only the Congress can fight for your rights," Rahul further said in his video address.