The BJP and the Trinamool Congress (TMC) are at loggerheads in poll-bound West Bengal. The top leadership of the BJP has been holding public meetings and roadshows across the state in recent months. 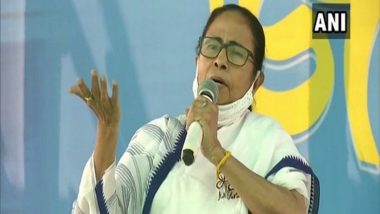 Addressing a public meeting in Kanthi Dakshin, Banerjee said, "Why to vote for them? What does the BJP have done? Just lying! They captured people's money in 'notebandi'. The BJP means Bharatiya Jaghanya (disgusting) Party."

"I was also a seven-time Lok Sabha MP. I have seen many prime ministers. But I have never seen such a cruel, authoritarian and dictatorial prime minister. The BJP is the party of monsters and demons. It is the party of Ravana, Duryodhana and Dushasana. It is the party of unrest and terror," she stated as she launched the fiercest attack on Prime Minister. The chief minister further attacked the BJP ruled Centre for the rising fuel price and high inflation. West Bengal Assembly Elections 2021: Will Make Bengal Free of Infiltrators; No One Will Stop Saraswati, Durga Puja if BJP Comes to Power, Says Amit Shah.

"What is the price of cooking gas today? It is Rs 850. They might reduce it by Rs 100 before the election and later will increase it by Rs 500," she said. Launching a veiled attack at her opponent BJP leader Suvendu Adhikari with whom Banerjee is having a direct contest in the Nandigram Assembly seat this time, Mamata said, "This is the district of Revolutionary freedom fighter Khudiram. Mir Zafar was also born in the same district. The traitor is born again. Remember, these traitors and Mir Zafars will 'punarmushika bhabha' (again will become a mouse)." West Bengal Assembly Elections 2021: Amit Shah Promises Seventh Pay Commission for Govt Employees in the State if Voted to Power.

Adhikari, a former minister in Mamata Banerjee's cabinet joined the BJP in December last year. The BJP and the Trinamool Congress (TMC) are at loggerheads in poll-bound West Bengal. The top leadership of the BJP has been holding public meetings and roadshows across the state in recent months.

Elections to the 294-member state Assembly will be held in eight phases starting from March 27 with the final round of voting taking place on April 29. The counting of votes will take place on May 2.