Shah pointed out that while Mamata wanted to make her nephew the Chief Minister, on the other hand, Prime Minister Narendra Modi wants to make Bengal into 'Sonar Bangla'. 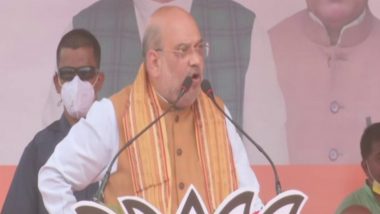 East Midnapore, March 21: Union Home Minister Amit Shah on Sunday assured voters that Bengal will be freed of infiltrators in five years and no one will stop residents from performing Saraswati and Durga puja when Bharatiya Janata Party comes to power.

"Didi gave slogan of 'Maa, Maati, Manush', but did change come? Infiltration was there earlier and even now it is there. Do you want freedom from infiltrators? Can Didi give you freedom from infiltrators? We will make Bengal free of infiltrators in five years. If we are voted to power no one can stop you from performing Saraswati and Durga puja," he said at the rally. West Bengal Assembly Elections 2021: Amit Shah Promises Seventh Pay Commission for Govt Employees in the State if Voted to Power.

"Don't be afraid. Goons of Mamata Banerjee will have a hard time. TMC goons won't be able to stop you from voting," he said. Shah was accompanied by former TMC Member of Parliament (MP) Sisir Adhikari, father of Suvendu Adhikari, who is contesting against Chief Minister Mamata Banerjee from Nandigram. The former BJP national President also mentioned the alleged killing of 130 BJP workers by the TMC.

"Our 130 cadres were killed. TMC goons should not think they will be spared. We will find them even in hell. We will take action when our government will come to power on May 2," said the Union home minister. Levelling allegations of corruption against Chief Minister, Shah further said the 'cut money' taken by the nephew is routed to Didi.

"This government is epitome of corruption. Nephew's cut money goes to Didi. Should this be stopped? Mamata Didi says what is the problem in giving Rs 500. Your money won't go in cut money if we are voted to power," he added.

Shah pointed out that while Mamata wanted to make her nephew the Chief Minister, on the other hand, Prime Minister Narendra Modi wants to make Bengal into 'Sonar Bangla'.

He also promised direct cash transfers to fisherman and farmers along with the health benefit scheme Ayushman Bharat to the poor. West Bengal is witnessing a high-voltage battle between the BJP and the TMC for the upcoming Assembly polls.

Elections to the 294-member state Assembly will be held in eight phases starting from March 27 with the final round of voting taking place on April 29. The counting of votes will take place on May 2. (ANI)